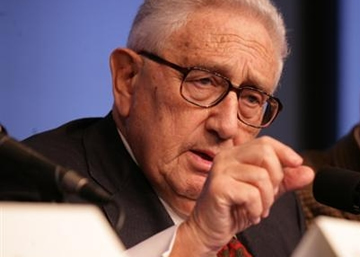 Israel talks of military option as Kissinger warns over Iran 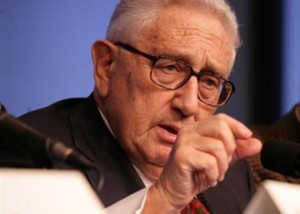 Israeli officials said Thursday that military action against Iran needed to stay on the table, as former U.S. secretary of state Henry Kissinger warned of a crisis over Tehran’s nuclear ambitions in the “very foreseeable future”.

“There will be more attempts to try and negotiate, but there will always be in the horizon a military option, because if the Iranians think it’s only economic and political, they won’t pay attention,” Peres told global political and business leaders at the annual gathering in the Swiss ski resort.

Israel and Western powers accuse Iran of seeking to acquire a weapons capability under the guise of its nuclear energy program but Iran denies the charge, saying its work is for peaceful purposes only.

Prime Minister Benjamin Netanyahu, who emerged from an election Tuesday with a new term as Israel’s leader, has frequently warned about the danger of Iran’s nuclear program.

Israel has refused to rule out a military strike to prevent Iran from obtaining nuclear arms.

Barak, who has announced plans to retire after Netanyahu forms a new government, told the forum that stronger sanctions were needed against Iran.

“There is a need for much more drastic sanctions, a kind of quarantine of all imports and exports,” Barak said, though he admitted that China and Russia were unlikely to agree.

He said he understood Washington’s desire to have “all alternatives” exhausted before military action over Iran, but that there was also a need to be ready to carry out targeted attacks.

“If worst comes to worst, there should be a readiness and capability to launch a surgical operation that will delay them by a significant timeframe and probably convince them… the world is determined to block them,” Barak said.

In a wide-ranging talk on foreign affairs, Kissinger said he expected the Iranian nuclear issue to soon come to a head.

“For 15 years, the permanent members of the United Nations Security Council have declared that a nuclear Iran is unacceptable, but it has been approaching,” he said.

“People who have advanced their view will have to come to a determination about how to react or about the consequences of non-reaction,” he said.

“I believe this point will be reached within a very forseeable future.”

Kissinger said negotiations with Iran needed to be given “a real chance” and that “unilateral action by Israel would be a desperate last resort.”

He said he expected “Iran to be high on the agenda” of U.S. President Barack Obama’s new administration, and said failure to deal with the question could lead to a spread of nuclear weapons in the region.

“That would be a turning point in human history,” Kissinger warned.

Israel has been pressing Obama to set a red line for Iran on the nuclear issue, after Netanyahu warned at the U.N. General Assembly in September that Tehran could have the necessary material for a first bomb by the summer of 2013.

The new U.S. secretary of state nominee, Senator John Kerry, told a confirmation hearing on Thursday that “the clock is ticking”, and that Washington will not be satisfied with just containing Iran.