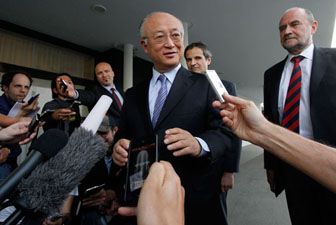 IAEA to Israel: Iran nuclear issue must be solved peacefully 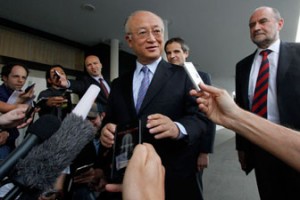 IAEA to Israel: Iran nuclear row must be resolved peacefully

The U.N. nuclear watchdog chief has underlined to Israel’s president the need to resolve differences with Iran diplomatically, Yukiya Amano’s office said on Friday, rather than war as Israeli leaders have mooted.

Iran is set to unveil a new generation of fighter jet, which will be capable of both ground and air attacks. Local reports quoted Iranian Defence Minister Ahmad Vahidi as saying: “A new fighter jet to be unveiled soon is designed as a bomber and performs both air-to-air and air-to-ground missions. It is fully engineered by Islamic Republic of Iran’s scientists and is considered a very important achievement for Iran.”

South Korean prosecutors have detained and charged a Korean American with the illegal transfer of a staggering 1.09 trillion won ($1.02 billion) in Iranian money frozen in South Korea under international sanctions, the lawyers said on Friday.

Russia does not consider sanctions to be an effective way to address the Iranian nuclear issue, Dmitry Peskov has said in an interview with the National Interest. “Diplomacy is preferable,” was the official’s position.

Israel talks of military option as Kissinger warns over Iran

Israeli officials said Thursday that military action against Iran needed to stay on the table, as former U.S. secretary of state Henry Kissinger warned of a crisis over Tehran’s nuclear ambitions in the “very foreseeable future”. Speaking at the World Economic Forum in Davos, Israeli President Shimon Peres and Defense Minister Ehud Barak said the threat of military action was vital to efforts against Iran’s nuclear program.