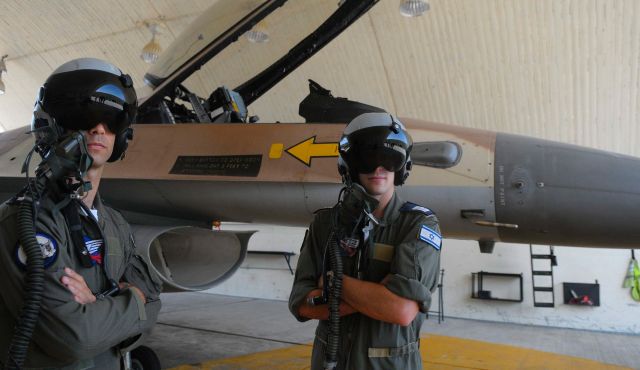 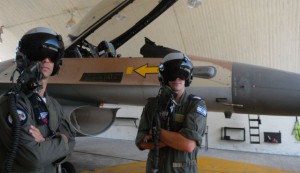 Most voters at air force-base polling stations preferred Lapid over Netanyahu. Is this because they are more moderate, or because of the implication of the premier’s threats against the Islamic Republic?

During this past term in office, Prime Minster Benjamin Netanyahu evinced great affection for the Israeli Air Force. He enjoyed being photographed with planes and pilots and posted a picture of himself on Facebook with the women of an aircrew in flight overalls. The air force has also enjoyed generous budgeting during Netanyahu’s time in office, accelerating the military preparations for bombing nuclear installations in Iran.

It is hard to know what the combat pilots think about the prime minister and attacking Iran, but the outcome of the election reveals an interesting clue. In the five family residential quarters on air force bases where polling stations were opened, Yesh Atid won big over Likud-Beiteinu. This was the case at Tel Nof, Hatzerim, Nevatim, Ovda and Ramon. Only at the Hatzor base were more ballots with the Likud letters “mem–heh–lamed” cast than with the Yesh Atid letters “peh–heh.” The voter turnout rate in the air force was identical to the national average 67.7 percent and of the 681 eligible voters, 32.2 percent supported Yair Lapid and 20 percent supported Benjamin Netanyahu.

The conclusion is obvious. In the pilots’ neighborhoods, people preferred Lapid and were not impressed by Netanyahu’s gestures, attention or generous budgets. In the previous election, too, Tzipi Livni defeated Netanyahu in the air force family neighborhoods (at that time there were polling stations only at four of the bases). Does this mean the air force family is more moderate in its views than the political leadership? Are the pilots’ families less than enthusiastic about attacking Iran?

Who will smell the cigars?

Netanyahu sees the current election as a referendum on an attack on Iran, which he has passed successfully. The decision as to whether or not to attack is getting closer according to the timetable Netanyahu displayed at the United Nations in September and is expected to be made this coming spring or summer.

Who will participate in the decision? The election will bring changes in the forum of top ministers that discusses foreign policy and defense. Most of the members of the group of nine in the outgoing government will not take part in the “whiskey and cigars” discussion in the next government. Among them are ministers Benny Begin, Dan Meridor, Avi Dichter, Avigdor Lieberman probably Ehud Barak, whom Netanyahu will apparently have a hard time keeping at the Defense Ministry, Yuval Steinitz, who will resign from the Finance Ministry and Eli Yishai, who even if Shas joins the government will have to compete with Aryeh Deri for the top job. Only Netanyahu and Moshe Ya’alon will keep their seats in the forum.

Who will replace them as the “red line” for a decision on attacking Iran draws near? We can supposed they will include the heads of the factions that appear likely to make up the next coalition governmnet: Yair Lapid of Yesh Atid, Naftali Bennett of Habayit Hayehudi, Shaul Mofaz of Kadima and Tzipi Livni of Hatnuah, along with Tzachi Hanegbi, who supports an attack and whose positions are very close to Netanyahu’s on these matters, and a high-ranking representative of Yisrael Beiteinu, like Yair Shamir.

The new members will be far less experienced than the veterans of the current forum and the timetable Netanyahu presented does not leave them a lot of time to study the material. The result will be a strengthening of the senior defense officials’ status, first and foremost Israel Defense Forces Chief of Staff Lt. Gen. Benny Gantz and Air Force Commander Amir Eshel. Their positions in the discussions will be crucial, even more so than in the past.

The end of primaries

This election also marks the end of the primary system. Yesh Atid, Yisrael Beiteinu, Hatnuah, Kadima and the ultra-Orthodox factions did not hold internal elections. Party leaders or rabbis determined their Knesset candidates. The primaries in Likud led to the election of an extreme rightist slate and the dumping of moderate politicians. Only Labor and Habayit Hayehudi chose fresh and successful lists of candidates in party primaries.

These results indicate that the political system is moving away from the primary election system. It is now time for all the system-fixers to come up with a new idea. It must be one that guarantees democracy within parties while granting their leaders some freedom of action. Otherwise, we’ll remain stuck with a bunch of dictators who play democracy externally while imposing tyranny inside their political homes.