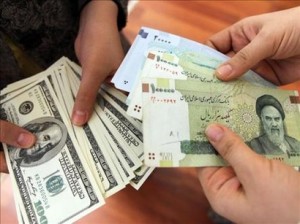 The Iranian rial has dropped sharply on the open market since Sunday on speculation the head of the country’s central bank could be sacked in a row over his performance that has exposed the country’s political faultlines. Reuters contacted currency traders who offered the rate of 35,400-550 to the dollar on Tuesday morning, little changed from Monday but down some 8 percent from Sunday when it stood at around 33,000.

International sanctions imposed against Iran over its disputed nuclear program are affecting all areas of Iranian life. Lately, inflation and a severely depreciated currency have begun to bite in a segment of society that seems far removed from debates over uranium enrichment and “possible military dimensions”: Tehran’s artistic class. As the economy crumbles, artists find that many erstwhile collectors now treat their work as a dispensable luxury. To maintain sales, galleries try to put a limit on prices while the cost of daily commodities rise. But while some artists struggle, the barren economy provides fertile ground for young creatives willing to settle for smaller profits – and for those who appeal to an international audience.

Iran will try three former judges who were suspended over the deaths in detention of three men arrested in the protests that followed the 2009 presidential election, Mehr reported. The trial’s first session will be held on Feb. 26, Prosecutor-General Gholamhossein Mohseni-Ejei said yesterday, according to the state-run news agency. The judges were suspended in 2010.

An Iranian Navy commander has announced that the naval forces of the Islamic Republic and Oman plan to hold a joint rescue and relief drill in Iran’s southern territorial waters. Captain Seyyed Omid Golestaneh said on Monday that various maritime accidents and unfavorable weather and sea conditions are among the dangers that have always threatened the safety of the vessels and the crew of the ships.