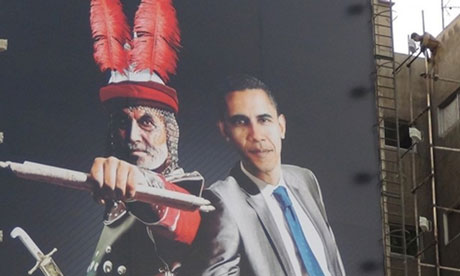 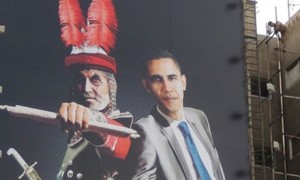 For connoisseurs of political symbolism, Tehran – a city whose best billboard real estate is devoted to Islamist ideology – is a feast. Government-sanctioned murals of ayatollahs and “martyrs” of the Iran-Iraq war are visible around every third or fourth corner. Anti-American displays are rarer, but a skull-faced Statue of Liberty – an apparent homage to an Italian second world war propaganda poster – decorates the wall of the former US embassy, and a parody of an American flag, with skull-stars and bomb-dropping stripes, overshadows a major road.

Depictions of foreign politicians are almost unknown, but last week an Iranian website showcased photographs of a dramatic new anti-Obama mural near the city’s busy Valiasr Square. The image is of Barack Obama standing next to Shemr, a villain in Shia Islam, with a BBC-style caption at the bottom attributing to both men, in the years 2013 and 680 respectively, the loaded phrase: “Be with us, be safe.”

This is an example of what one might call “high-context” propaganda. Whereas in America unfounded insinuations that Obama is a Muslim come from his enemies, in Iran they come from admirers. As Iranian-American journalist Hooman Majd recalls in his 2012 book, The Ayatollahs’ Democracy, Obama’s 2008 presidential campaign inspired rumours in Iran that the senator from Illinois had Iranian roots. Some fans made much of his middle name – Hussein – which he shares with the central martyr in Shia theology, the prophet Muhammad’s grandson. Others made an omen of his surname, observing that it sounds like Oo ba ma’st, or “He’s with us”, in Farsi.

The Tehran mural aims to invert this occult symbolism by recourse to Shia tradition. The villain Shemr belongs to the narrative of Hussein’s martyrdom at the Battle of Karbala in 680, the trauma that split Muslims into Sunni and Shia denominations. The Shia, or “Party of Ali” (Muhammad’s cousin and son-in-law) sought hereditary leadership of Islam. After the murder of the Caliph Ali, and the death of Ali’s son and successor Hassan, Ali’s younger son Hussein clashed for succession with the Umayyad Caliph Yazid, who sent Shemr’s army to destroy Hussein and his followers. Shemr offered some of Hussein’s supporters a “letter of protection” in exchange for betraying him, but they refused.

In the mural, Shemr extends a similar letter to the viewer, as he and Obama utter the words Ba ma bash – “be with us” – playing on the president’s name, and insinuating that anyone who still likes Obama in the wake of tightening sanctions – or who advocates meeting American, EU, or International Atomic Energy Agency demands over Iran’s nuclear programme to avoid conflict – is a traitor to the faith. Obama, the state insists, is a “Hussein” unworthy of loyalty.