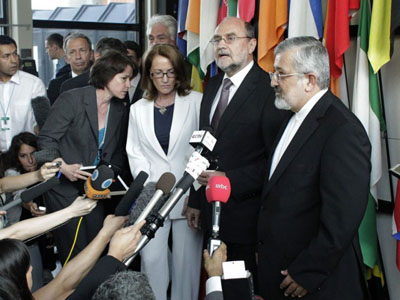 As IAEA arrives in Tehran, Iran braces for full force of US sanctions 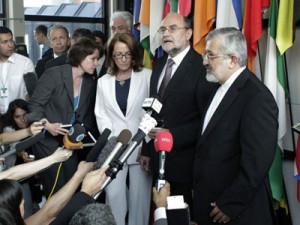 As Iranian officials prepare for a new round of negotiations with the International Atomic Energy Agency (IAEA), US sanctions set to hit Tehran in February have Iranians worried that billions of dollars long stuck in bank accounts outside the Islamic Republic could soon become cemented in place.

The new US Treasury sanctions, which go into effect Feb. 6, will formally regulate global banking constraints that Iranian banks and businesses have been facing, on an informal basis, for more than two years.

Senior Iranian officials slammed the measures, calling them one of many “purely political” sanctions the US has imposed on Iran since the country’s 1979 revolution and subsequent establishment of an Islamic Republic.

“The US is a member of the ‘5 plus 1,’ and if they really want to solve this problem … if they are really worried about our activities, they can refer to it through technical [nuclear negotiations], and not politically,” said Foreign Ministry spokesman Ramin Mehmanparast in a phone interview from Tehran.  “If they think they can achieve their goals with sanctions, that is a very big mistake.”

Sanctions have been a key part of the US strategy to force Iran to negotiate over its nuclear program, which the United States and its allies claim is intended for producing nuclear weapons. Tehran insists its program is peaceful, intended for medical research and meeting the energy needs of its rising population.

Iran last met with the so-called ‘P5 plus 1’ powers — the United States, China, France, Germany, Russia, and Britain — in Moscow in June, but the negotiators made little progress in reaching an agreement.  In spite of some reports within the international community that the talks may be delayed, Mr. Mehmanparast said Iran’s deputy nuclear negotiator, Dr. Ali Bagheri, has been communicating with his European counterpart, Helga Schmid, and that another round of talks with the ‘P5 plus 1’ is expected later this month.

The aim of Washington’s February sanctions measure is for Tehran’s oil revenues to become largely “shackled” within any country buying oil from Iran, undersecretary for terrorism and financial intelligence David Cohen declared at a conference in Washington last month.

This means Iran’s international oil customers – even those with State Department waivers exempting them from US Treasury penalties for purchasing Iranian oil – will officially be at risk of being cut off from the US banking system if they allow transfers of Iran’s oil revenues back to Tehran’s Central Bank.

If implemented, the National Iranian Oil Company would be formally forced to keep its oil revenues in local bank accounts inside countries purchasing its oil, and could only use those oil earnings to purchase “permissible” services and goods, such as food, medicine, and basic medical equipment, from those oil customers as imports back into the Islamic Republic.

Iran’s oil sales first began to decline in 2010 due to the rise in transaction costs for purchases of Iranian oil resulting from sanctions. Oil sales plummeted further after the European Union imposed an oil embargo against Tehran in July 2012.  To push Iran’s oil sales down even more, Washington now directly penalizes foreign companies that purchase Iran’s oil, and sanctions banks that facilitate financial transactions, such as money transfers, with the Islamic Republic.

The main purchasers of Iran’s oil today are refineries from Japan, Turkey, China, Taiwan, South Korea, and India.  The US State Department has waived US Treasury sanctions against these countries in exchange for significantly reducing their volume of oil purchases from Iran, as well as for South Africa, Sri Lanka, Singapore, and Malaysia, who do business with Tehran on a smaller scale.

Iran-based business owners say a considerable chunk of Tehran’s oil revenues have already been tied up and locked in international bank accounts for more than two years because of US sanctions legislation, which was first imposed in 2006 and seriously implemented after 2007.  International banks have become increasingly wary of authorizing money transfers to pay for goods — even those licensed by the Treasury Department as permissible — for fear that a transaction with any Iranian entity could trigger a cut-off from the US banking system as a whole.

As a result, roughly 80 percent of Iran’s financial transactions have been re-channeled through banks in Turkey, South Korea, India, China, and Russia, according to financial advisers inside the Islamic Republic. Thus the new sanctions slated to take effect this February will merely tighten an already-existing noose around Iranian government and private sector money.

“This phenomenon has been happening in practice anyways. The US is now just widening the net,” says Erich Ferrari, a Washington-based lawyer specializing in sanctions and US Treasury financial regulations. “Those who are going to deal with Iran will keep doing so, but it’s going to get harder to pay them.”

Early this month, President Obama signed new legislation intended to prevent Iran from receiving precious metals such as gold or materials like steel and graphite, among others, as payment for its oil.  Iranian economists say these measures, expected to take effect in the next six months, will pressure the trading partners Iran has left to regularize their transactions with the Islamic Republic and bring them firmly online with US policies.

Tomorrow, Tehran will host new discussions with the IAEA. The UN nuclear agency has said it hopes Iran will address concerns about evidence the IAEA claims to have showing that in the last decade, Iran may have conducted tests geared toward nuclear weaponization at the Parchin military complex, roughly 20 miles outside of Tehran. Iran denies the charge, and says the IAEA’s evidence is based on faulty intelligence, which it has not even seen.

Mr. Mehmanparast, the Iranian Foreign Ministry spokesman, would not comment on whether the IAEA inspectors would be allowed to visit Parchin, saying only that Iran looks forward to the next set of meetings with the IAEA.

“We hope to achieve a final result in which they accept completely our right to our activities.  We are waiting to solve their worries about our nuclear activities,” he said. “If they really want to have some agreement with the Iranian side, [the IAEA] can reach this very soon.”