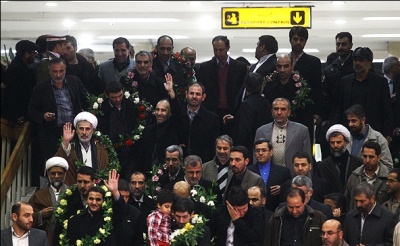 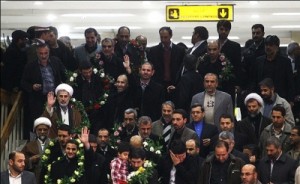 Revolutionary Guards likely to be among the 48 Iranians released by rebels, though Tehran says otherwise

So, who were they at last? Pilgrims or members of Iran’s Revolutionary Guards? The identities of 48 Iranian nationals who were released from Syria after a prisoner swap, brokered by Turkish aid workers and Qatar, are gradually emerging.

Syrian rebels behind the kidnapping of the Iranians from a bus in the suburbs of Damascus alleged that their captives were sent to help the Assad regime crush its opponents. Iran denied this but said some were retired Revolutionary Guards. According to Tehran, the Iranian nationals were pilgrims on their way to the shrine of Hazrat Zainab, a popular destination in Syria for devout Shia Iranians.

Last week, more than 2,100 opposition prisoners, including Turkish nationals, were exchanged for the 48 Iranians who were held captive for five months.

It is not unusual of Iranian pilgrims to ignore warnings about travelling to conflict zones. In the turbulent years following the US invasion of Iraq, many Iranians travelled to the country’s Shia sites although some were killed in bombings. But Iranian websites are exposing the identity of the former captives of the Syrian rebels, making clear that, in fact, a number of them are currently working for the Revolutionary Guards. It’s not clear how many were actual pilgrims.

Digarban, a website that monitors the country’s conservatives and their online activities, reported that at least seven guards commanders were among the released prisoners. “Abedin Khoram, the [current] commander of the Revolutionary Guards’ division in Orumieh … is among those released who have returned to Iran,” it reported.

The website names a number of other people linked to the elite force who are either current of former members. Some of the identities are apparently exposed inadvertently when faces are revealed in welcoming ceremonies held in their hometown or in reports on local news websites.

Iranian officials have so far refused to publish the full list of those who were held in Syria.

In the nearly two years conflict in Syria, Iran has stood firm by Bashar al-Assad and is accused by the west of militarily supporting his regime. Iran initially denied the accusations but in May, a senior Revolutionary Guards commander admitted that Iranian forces were operating in Syria in support of the Assad regime.

“If the Islamic republic was not present in Syria, the massacre of people would have happened on a much larger scale,” said Ismail Gha’ani, the deputy head of Iran’s Quds force, the arm of the guards tasked with overseas operations.

Commenting on the release of those held in Damascus, Iranian foreign ministry spokesman, Ramin Mehmanparast, told the state-run Press TVon Monday: “Abducting innocent people to exert political pressure on the [Syrian] establishment is an inhumane means; and with the help of other countries we should prevent such acts.”