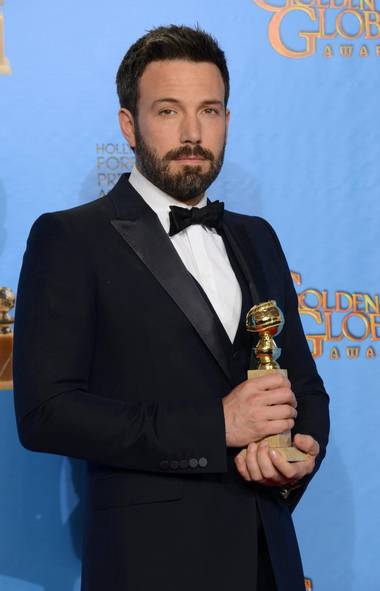 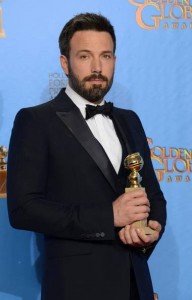 Affleck was left out of the Best Director category in last week’s Oscar nominations, but the 40-year-old star is having a successful awards season nonetheless; on Thursday, he also accepted the Best Director and Best Picture prizes from the Critics’ Choice Movie Awards. This is his first victory at the Golden Globes since he and Matt Damon became the youngest winners of the Best Screenplay prize for Good Will Hunting, 15 years ago.

On a night where no single film swept the board, the British-made Les Misérables came away with the heaviest armful, winning three Globes for Best Picture (Musical or Comedy); Best Actor (Musical or Comedy) for Hugh Jackman; and Best Supporting Actress for Anne Hathaway. Its director Tom Hooper, like Affleck and Bigelow, was denied a place in the Oscars’ Best Director race.

Hollywood’s favourite living president, Bill Clinton, received a standing ovation as he appeared to introduce Steven Spielberg’s biopic of America’s favourite dead president, Lincoln. Daniel Day-Lewis was named Best Actor (Drama) for his performance in the title role; he remains hotly-tipped to win a record third Academy Award next month. But Spielberg and co will go away less confident about their Oscar chances, despite Lincoln’s 12 nominations.

Quentin Tarantino’s blood-soaked slavery revenge yarn, Django Unchained, was rewarded with a brace of Globes: Best Supporting Actor, for Christoph Waltz, and Best Screenplay, which Tarantino called “a damn surprise”. Jennifer Lawrence won in the last of the major categories, Best Actress (Musical or Comedy), for her work in David O. Russell’s Silver Linings Playbook. Acknowledging producer and seasoned awards campaigner Harvey Weinstein in her acceptance speech, she said, “Harvey, thank you for killing whoever you had to kill to get me up here today.”

In the television categories, it proved to be another good year for America’s premium cable channels, which triumphed once again over their network rivals. HBO garnered three Globes for its TV movie Game Change, about the 2008 presidential election; and two for hipster dramedy Girls, including Best Actress in a Television Comedy for its 26-year-old creator and star, Lena Dunham. Showtime managed a hat-trick with Homeland, which won Best Television Drama, as well as acting honours for its two leads, Claire Danes and Damian Lewis.

Lewis was among a handful of British winners. Dame Maggie Smith was nominated in a film category for her role in Quartet, but won in a television category, as Best Supporting Actress in a Miniseries, for her perpetually scene-stealing turn as the Dowager Countess of Downton Abbey. Meanwhile Adele added to her nine Grammys with a Golden Globe for Best Original Song – her Bond theme, “Skyfall”.