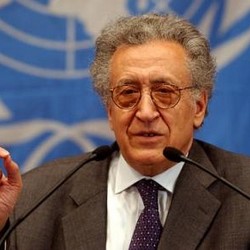 Iranian Foreign Minister Ali Akbar Salehi and UN-Arab League Special Envoy to Syria Lakhdar Brahimi have discussed the latest developments in the Arab state and proposed solutions to the ongoing unrest there.

During a meeting in the Egyptian capital of Cairo on Thursday, Salehi and Brahimi exchanged views on Syrian President Bashar al-Assad’s roadmap for peace and Iran’s six-point peace plan to settle the unrest in Syria.

In a key speech on January 6, Assad called for an end to the terrorist operations inside Syria and urged “concerned states and parties” to stop funding, arming and harboring militants.

Assad added that his government is always ready to hold talks with the opposition and political parties and that he would call for a “comprehensive national dialog” after foreign parties end their support for the militants and the terrorist activities cease in the country.

The Iranian minister pointed to the “difficult and sensitive” situation in Syria and stressed the importance of making constant and great efforts to resolve the woes in the country.

He added that Iran has pursued a clear stance on the unrest in Syria since its outset and has always placed emphasis on finding a Syrian-Syrian solution without the interference of foreign forces, putting an end to the violence and holding national dialogue.

On December 16, Iran unveiled the details of the six-point plan to resolve the ongoing crisis in Syria, which calls for an immediate end to all violent and armed acts.

The plan calls for sending humanitarian aid to Syrians following the end of all conflicts, lifting all economic sanctions imposed against the country, and facilitating the return of displaced Syrians to their homes.

It also urges talks between the Syrian government and the representatives of all Syrian groups regardless of their political and social tendencies in order to form a national reconciliation committee.

Brahimi, for his part, said Iran plays a leading role in regional developments, adding that the Islamic Republic’s status and influence can be used in line with regional interests.

He emphasized that all bids and plans should protect the interests of the Syrian people and government.

Brahimi and Salehi called for the continuation of bilateral consultations in the future.

Meanwhile, the Iranian foreign minister, who is on an official visit to Egypt, also met with Arab League Secretary-General Nabil al-Arabi on Thursday and discussed the latest regional issues, particularly the ongoing unrest in Syria.

Syria has been the scene of unrest since early 2011 and has witnessed the deaths of many people, including large numbers of army and security personnel, in the violence.