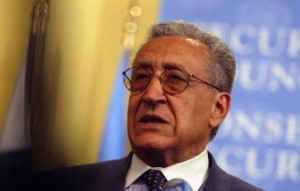 Iran has held talks with Lakhdar Brahimi, U.N. and Arab League envoy on Syria, who is set to jointly hold talks with American and Russian officials in Geneva on Friday.

Mr. Brahimi’s meeting with William Burns, U.S. Deputy Secretary of State, and Mikhail Bogdanov, Kremlin’s West Asia envoy, has generated speculation that a plan to defuse the Syrian crisis that is jointly engineered by Moscow and Washington, is in the works.

Mr. Assad on January 6 had proposed a conference with the opposition, but insisted on the exclusion of the western-backed “rebels” and Jihadists, with al-Qaeda affiliation, in the dialogue. He stressed that the proposed talks were meant to write a constitution, which would come into force once the draft was approved during a national referendum. He also proposed the formation of an interim government and an initiative for reconciliation.

Iran has supported Mr. Assad’s plan, and Russia has stressed that the presidential proposals “must be given consideration”.

Russian Foreign Ministry officials hoped that the Geneva meet would yield a solution based on last June’s Geneva Communiqué and the President’s proposals.

The agreement had called for the formation of a transitional government, but did not seek Mr. Assad’s exit.

The Russian and Iranian positions are expected to encounter resistance from the U. S. which has already rejected Mr. Assad’s plan.

Separately, without mincing words, Mr. Brahimi also trashed the Syrian initiative. Speaking to BBC, he said “what has come out is very much a repeat of previous initiatives that obviously did not work… it’s not really different and perhaps is even more sectarian and one-sided.

“The time of reforms granted magnanimously from above has passed. People want to have a say in how they are governed and they want to take hold of their own future.”