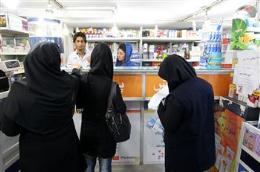 Who is responsible for Iran’s economic plight?

In a bid to save face, lame duck President Mahmoud Ahmadinejad lashes back at the Revolutionary Guard who accuse him of destroying the country.

Israel isn’t the only place where elections have muffled the “Iranian noise.” The winter hibernation into which Prime Minister Benjamin Netanyahu has, under American pressure, sent the Iranian nuclear threat has given Iran the respite it needs to prepare for its own election – a vote that will bring a new president to power in another half a year.

Mahmoud Ahmadinejad is not entitled to run again, owing to constitutional restrictions that prohibit a president from serving more than two consecutive terms. But he is making every effort to leave a political base of supporters behind him – and no less important, to clear himself of the accusation that he has destroyed the country.

Ahmadinejad’s next target is none other than the Revolutionary Guard. This enormous military organization, comprised of elite units that operate alongside the army and whose main purpose is to defend the Islamic regime, controls about two thirds of Iran’s economy. It owns factories, oil terminals and banks, manages civilian airports and controls agricultural lands. Thus in addition to the direct funding it receives from the government, the Revolutionary Guard also has its own independent sources of revenue that are not under government supervision.

What has recently roused the anger of Iranian economists and politicians is the tax exemption enjoyed by civilian ventures run by the Revolutionary Guard. Recently, an Iranian government agency posted a detailed report on its website, Shabake, concerning the decline in oil revenue. The report posed probing questions such as, “Why are powerful economic institutions like the army, which are involved in economic projects, exempt from tax? Why are important economic centers, like the Revolutionary Guard’s cooperative [i.e. its economic arm] and the army cooperative, failing to support the economy of the resistance? Why are they also exempt from taxation, instead of contributing to the economy?”

The phrase “economy of the resistance” was coined by Iran’s supreme leader, Ali Khamenei, to describe the national effort Iran and its citizens should make to cope with the effects of international sanctions on the country.

At a seminar on “Rebuilding the Revolutionary Guard” held two weeks ago in Tehran, Ahmadinejad relied on this report when he explicitly proposed that the organization sell the land on which the airport in Dushan Tepe is built. This is “land in the center of the city, 650,000 square meters in size, and it could be used to yield revenue for the state,” he said.

Senior figures in the Revolutionary Guard – an agency that made a decisive contribution to Ahmadinejad’s election as president in 2005 and 2009 by ordering hundreds of thousands of volunteers in the Basij militia, which it controls, to flood polling stations – did not rush to assent to this demand. Quite the contrary: They launched a counterattack aimed at acquitting themselves of guilt for the country’s economic crisis.

“I can’t understand why Ahmadinejad is even raising this issue right now,” said retired general Mansour Haqiqat-Pour, who was a senior officer in the Revolutionary Guard’s special forces, the Quds Force. “If he wants every government agency to sell its surplus assets, why doesn’t he sell the Ministry of Roads and Transportation building?

“If he sold that building, he’d be able to pave thousands of kilometers of roads in the villages,” continued Haqiqat-Pour, who was speaking at a difference conference. “If the president is serious in his intentions, then he should sell that building and the central bank. In that way, he could cover half the state’s budget.”

Haqiqat-Pour also proposed that the president start by selling beach villas owned by the state, as well as the opulent homes of senior officials, the Interior Ministry’s palace in Mohammadabad, and hotels controlled by government ministries in the city of Mashhad.

These statements are not only part of Iran’s burgeoning political dispute, they also reflect two opposing positions with regard to how Iran should deal with the sanctions. The Revolutionary Guard isn’t troubled by the sanctions, and some of its leading figures oppose conducting talks with the United States. But in parliament and outside it, some important voices are speaking out in favor of dialogue with America, on condition that it bring about an end to the sanctions regime.

To which of these groups will the supreme leader listen when he has to reach a decision about Iran’s policy, as he soon must? Some hints are likely to emerge even before the presidential election. In less than three months, parliament will have to authorize the annual budget. That will raise the questions of how much money should be cut from the defense budget, what should be done about the subsidies, and whether the Revolutionary Guard should start selling assets.