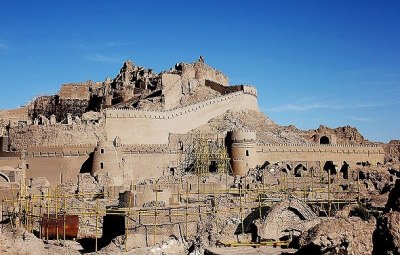 Photos: 10 years after quake, Bam Citadel yet to rise again

Arg-e Bam (Bam citadel) was the largest adobe building in the world, located in Bam, a city in the Kerman Province of southeastern Iran. It is listed by UNESCO as part of the World Heritage Site “Bam and its Cultural Landscape.”

On December 26, 2003, the Citadel was almost completely destroyed by an earthquake, along with much of the rest of Bam and its environs. The quake killed about 32,000 people, flattened 70% of Bam’s buildings and equally devastated the nearby town of Baravat and 260 area villages. Bam Citadelwas reduced from a stunning byzantine garrison, visited by more than 100,000 people yearly, to a canyon of pulverized rubble not much different than the other treeless, rock-strewn mountains that delineate the central Iranian plateau from the southern desert.

In the days after the quake, the Iranian government announced that the Citadel would be rebuilt. However, this architecture jewel has been ignored and neglected. The pace of reconstruction has been slow, and after 10 years this monument is yet to rise again.