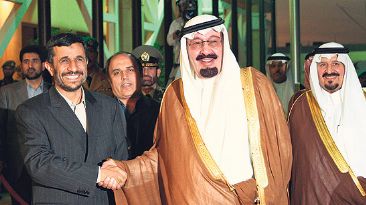 The Rivalry between Saudi Arabia and Iran in the Middle East

The Middle East is a region where any political movement appears as rivalry, a place where no one is without a rival, and where there are those who cannot be without a rival. There are two forms of competition: competition against one or more people, like chess, or competition with one or more people over something, like the 100 meters hurdle race. Competition in the Middle East is generally of the second form, and the two states which the struggle for influence in the Middle East has had them confront each other are the Kingdom of Saudi Arabia and the Islamic Republic of Iran.

Relatively good relations between the two states turned into an effective rivalry during the Iran-Iraq war between 1980 and 1988, following the Iranian Revolution in 1979, when Saudi Arabia extended diplomatic and financial assistance to the Iraqi authority during the war. After 1989, due to the policies pursued by both the Rafsanjani and Khatami governments in Iran, there appeared a détente in bilateral relations. For example, in 1999, Khatami became the first Iranian president to visit Saudi Arabia.

However, the American invasion of Iraq and the developments in Iraq afterwards, finally the Arab Spring, and especially the Saudi-led military intervention in Bahrain, accompanied by the current and probable winds of change, have intensified this rivalry. The rivalry between Saudi Arabia and Iran in the Middle East is a regional struggle for influence, in which both sides have refrained from open hostility, and have aimed at steering the course of events, shaping developments, and influencing decisions in the region according to their political preferences and interests. Certainly, it is not the only struggle for influence in the region, and besides these two states, there are intra-regional and extra-regional, intra-state and non-state, direct and indirect, resolute and irresolute, and in-line and in-limbo parties of the rivalry.

While there are both material conditions and political causes of the rivalry between Saudi Arabia and Iran, there are also ideational conditions and religious causes, which give this rivalry its own peculiar character stemming from the worldviews and religious identities of the parties. The metaphysics of rivalry is as important as the physics of rivalry, and the most important variable determining the metaphysics of rivalry is the self-identifications of the parties. While the prevailing form of self-identification in Iran stresses that Iran is a non-Sunni and non-Arab country, one of the ‘others’ of Salafism as the prevailing worldview in Saudi Arabia is Shi’ism. This situation gives both sides the means to mobilize material and non-material resources more, to provide legitimacy more easily for their policies, to make the basis of their support more widespread, and to broaden the sphere of their policies. In particular, for Iran, Shi’a politics is an indispensible part of its struggle for regional influence and its rivalry with Saudi Arabia.

Competition in the field

The regional rivalry between the two states continues in practice in Yemen, Palestine, Iraq, Lebanon, and Syria. The first front of the rivalry is the Persian Gulf. The rivalry between Saudi Arabia and Iran in the Gulf, which has traditionally taken place in the form of practical political initiatives and mutual accusations, has intensified with the Arab Spring. While, in March 2011, military troops from the Peninsula Shield Force, the military wing of the Gulf Cooperation Council, were stationed in Bahrain against the demonstrations that had emerged with popular demands for political and economic rights, one month later, the GCC accused Iran of interfering in the internal affairs of the Gulf countries and violating their sovereignty. The Iranian administration, on the other hand, described the intervention as an occupation, and issued severely critical statements against Saudi Arabia.

The latest front of the rivalry between Saudi Arabia and Iran is Egypt. The governments of both countries, being of the opinion that in the post-Mubarak era Egypt will be a more active and a more influential state in the Middle East, are revising their policies according to the changing circumstances. Although Saudi Arabia assumed an opposing stance against the demonstrations when the popular uprisings first started in Egypt and King Abdullah characterized them as fitnah, it would like to establish strong relations with the Morsi government. To that end, for example, Saudi Arabia has supplied $4 billion in financial aid to Egypt. As for Iran, it has launched a peace offensive towards Egypt, and announcing that it views the transformation in Egypt as part of what it calls the ‘Islamic Awakening’ in the Middle East, it has extended an olive branch to the Islamists in the Egyptian government. Reaching an agreement with the Egyptian government on the mutual exchange of ambassadors on the way of normalizing diplomatic relations between the two countries, Iran appointed an ambassador to Cairo in April 2011 for the first time since 1979. It appears that the Egyptian government would like to develop relations with both the two states. However, the fact that President Morsi’s first foreign visit was to Riyadh, and that he did not refrain from criticizing the Iranian government’s policies on Syria in August 2012 in Tehran, where he visited as the first Egyptian president after 1979, indicates that in the rivalry between Saudi Arabia and Iran, Egypt follows a policy closer to Saudi Arabia.

The Advantages and Disadvantages of the Parties

In this rivalry, the parties have political, economic military, and social advantages and disadvantages vis-a-vis each other.

In terms of Saudi Arabia, the basic advantages are (1) the active presence of a strong extra-regional ally in the region, e.g. the headquarters of the American Fifth Fleet is in Bahrain; (2) the existence of intra-regional allies which have gained political legitimacy, e.g. the Salafist Nur Party is now the main opposition party in Egypt; (3) its presence on international platforms and in international organizations whereby it would confer legitimacy on its policies, e.g. the G-20, and the GCC; and (4) vast financial resources and capabilities, as well as leading and directing a global religious transnational social network.

In terms of Iran, the principal advantages are (1) extra-regional allies, e.g. Russia; (2) intra-regional allies e.g. al-Maliki government in Iraq; (3) an advanced military industry and military capabilities as an element of threat even though not actually used, e.g. the Shahab medium range ballistic missiles; (3) social and political movements in the region which identify themselves on sectarian basis, e.g. Hezbollah in Lebanon, and close relations with these movements based on financial and military resources it has provided them with.

Saudi Arabia’s greatest disadvantage in its rivalry with Iran is the close relations it sustains with the USA which leads to questioning of the legitimacy of all its political actions. Iran’s greatest disadvantage in its rivalry with Saudi Arabia is its economic capabilities being limited, which weakens its regional policies in a number of ways, including constraining its political alternatives.

Finally, as far as Turkey’s foreign policy is concerned, in terms of the rivalry between Saudi Arabia and Iran in the Middle East, and not being exclusive to it, it may be worth reminding the principle of supervising the rivalry of the rivals in international relations.

By The journal of Turkish Weekly

The Iran Project is not responsible for the contents of quoted articles.