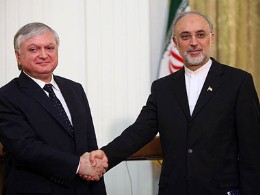 The sides stressed that the Karabakh issue should be resolved through peaceful negotiations based on the principles of the international law.