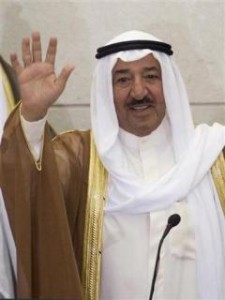 (Reuters) – Kuwait urged neighboring Iran on Monday to cooperate more with the U.N. nuclear watchdog to allay Gulf Arab concerns about the safety of an Iranian nuclear power plant that lies just across the waterway from the emirate.

The emir, Sheikh Sabah al-Ahmed al-Sabah, said a recent shutdown at the Bushehr plant indicated Tehran had to work with the Vienna-based International Atomic Energy (IAEA) to ensure the safety of the facility near the coastal town of Bushehr.

He was speaking in Bahrain at the annual summit of the Gulf Cooperation Council (GCC), a grouping of six oil-exporting Gulf Arab countries at odds with Tehran over a series of issues and who see the Islamic Republic as a rival for regional influence.

Bushehr, a Russian-built symbol of what Iran calls its peaceful nuclear ambitions, was shut down in October to limit any damage after stray bolts were found beneath its fuel cells, a Russian nuclear industry source said in November.

The explanation for the procedure at the 1,000-megawatt plant contradicted assurances by Iran that nothing unexpected had happened and that removing nuclear fuel from the plant was part of a normal procedure.

Sheikh Sabah said: “The news that was reported recently about the technical failure that hit the Bushehr reactor confirms what we mentioned about the importance of Iranian cooperation with the IAEA, and committing to its criteria and rule, to ensure the safety of the region’s states and its people from any effect of radioactivity.”

Iran is the only country with an operating nuclear power plant that is not part of the 75-nation Convention on Nuclear Safety, which was negotiated after the 1986 nuclear disaster at the Chernobyl nuclear plant.

Although the West suspects the Islamic Republic of trying to develop the means to build nuclear arms – a charge it denies – Bushehr is not considered a major proliferation risk by Western states, whose fears are focused on sites where Iran has defied global pressure by enriching uranium beyond levels needed to fuel civilian atomic power plants.

Nevertheless Western officials voiced concern in November about what they described as an unexpected unloading of fuel at Bushehr and said Tehran, which has dismissed it as a normal step, must clarify the issue.

Iran’s ambassador to the IAEA said in November that Tehran was determined to make sure safety at Bushehr was guaranteed after the plant is turned over to Iranian operators.

The plant, whose start-up has been delayed for years, was finally plugged into Iran’s national grid in September 2011, a move intended to end protracted delays in its construction. The plant’s Russian builder was quoted in October as saying Bushehr would be formally “handed over for use” to Iran in March 2013.

“We renew our calls to our brothers in Iran to respond to our invitations to put an end to pending issues between the GCC countries and Iran … through direct negotiations or by resorting to international arbitration,” he said.

Bahrain has repeatedly accused Tehran of meddling in its internal politics. Saudi Arabia has complained about alleged border breaches by Iran, and the UAE has a long-standing dispute with the Shi’ite Muslim power over three Gulf islands. Iran denies seeking subvert Bahrain or any other Gulf Arab state, and says its intentions in the region are purely peaceful.