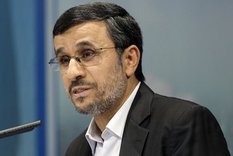 Tehran says country is benefiting from sanctions against it

Iran’s industries, mines and trade minister belittled Western sanctions on his country, asserting that instead of causing damage they have in fact managed to strengthen the economy.

Mehdi Qazanfari said embargoes on Iranian products and blockades on selling to the Islamic Republic forced its domestic production to step up, the state-run Fars news agency reported on Monday.

“Sanctions have caused an economic advantage for the production sector, and we should use this opportunity in the best way,” Qazanfari said Siunday at a conference in Tehran.

Iran is now facing its fourth round of United States-led international sanctions over its controversial nuclear program. The measures are aimed principally at squeezing its financial operations and oil sales around the world.

In October rioting broke out in Tehran in protest to the plunging value of the Iranian rial. The currency has reached record lows, ravaging the country’s economy, partly caused by the wide-ranging sanctions.

Iranian leaders have tried to downplay the sanctions’ effects. On Saturday, Iranian President Mahmoud Ahmadinejad said Tehran was engaged in a “smart economic war” with the West and was proving resilient in the face of the international isolation.

Tehran has vowed to press on with the nuclear program, which is widely believed to be for military purposes. Iran says the uranium enrichment is peaceful.

economic war, EU, Iran's nuclear program, Mehdi Qazanfari, Quoted, sanctions against Iran, US December 24, 2012
To live with a nuclear Iran or to make war on it?
Iran has oil reserves for next 150 years