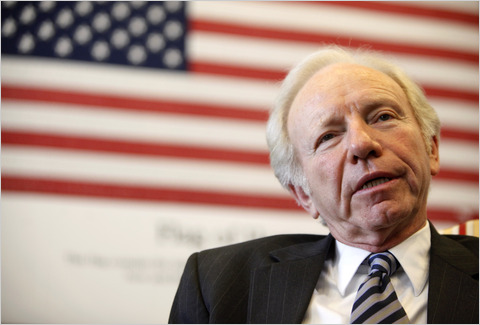 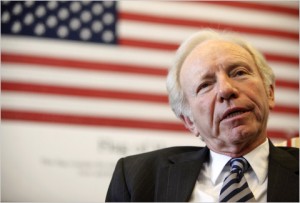 “Chuck Hagel has consistently been against economic sanctions to try to change the behavior of the Islamist regime, the radical regime in Tehran, which is the only way to do it, short of war,” Lieberman told Candy Crowley on CNN’s State of the Union. “

Asked if Hagel’s positions on the Middle East, cited by many Jewish groups and some members of Congress in opposition to the potential nomination should disqualify Hagel, Lieberman said “I wouldn’t say that his votes disqualify him, but if I were in the Senate on the Armed Services Committee and he was nominated I would have some really serious questions to ask him.”

Lieberman, a former Democrat who was elected as an independent in 2006 is retiring from the Senate at the expiration of his current term. He said Iran was the most serious foreign policy issue facing the Obama administration and the world in the next year or two.

The National Defense Authorization Act, passed in its reconciled version before both houses broke for Christmas holidays on Dec. 21, includes provisions authored by Sens. Robert Menendez (D-N.J.), Mark Kirk (R-Ill.) and Joseph Lieberman (I-Conn.) that would among other enhancements sanction entities that circumvent existing banking sanctions on Iran by paying for Iranian oil with gold.

Obama administration officials had resisted the enhancements, which also include new restrictions on dealing with Iran’s ports, saying they would inhibit efforts to persuade other nations to adhere to existing sanctions that aim to force Iran to suspend its suspected nuclear weapons program.

Congressional negotiators gave the White House more time to implement the sanctions, but would not further water them down.

The Obama administration had, prior to negotiations, suggested the president might veto the legislation because of a range of measures it opposed. It was not clear yet if the president was satisfied by the compromises.

Israel says that Iron Dome successfully deflected 80 percent of Hamas rockets aimed for Israel in its recent conflict with Hamas in the Gaza Strip.

“AIPAC thanks Congress for its actions to thwart Iran’s nuclear quest and help Israel defend against emerging threats,” AIPAC said in a statement. “America must continue to lead these efforts. AIPAC urges immediate implementation of the new sanctions and continued U.S.-Israel cooperation in missile and rocket defense.”

By The Jewish Week