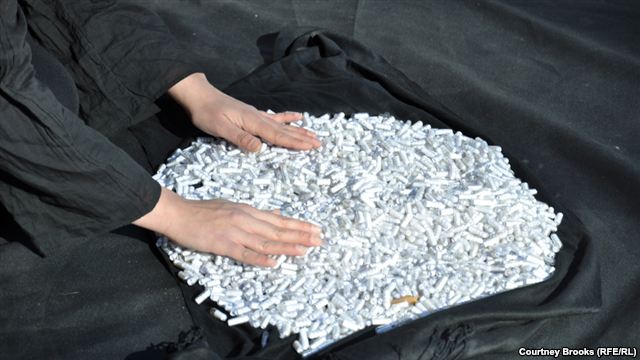 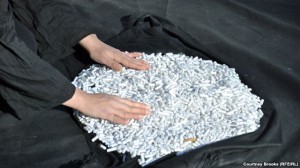 UNITED NATIONS — Young Iranian artist Sanaz Sohrabi has a mission: to raise awareness of the impact crippling international sanctions are having on ordinary Iranians, especially those living with illnesses.

She took the first step this week, setting up a small performance-art protest across the street from UN headquarters in New York.

Sohrabi, 24, sat silently before thousands of pill capsules filled with strips of paper telling the stories of 40 Iranians who say they have not been able to attain medicine or medical help as a result of the sanctions. The aim is to show that each drug shortage affects a large number of people.

Speaking before the protest, Sohrabi said her sister, who works as a pharmacist in Tehran and sees the medicine shortage firsthand, inspired her to raise awareness of the problem.

“I’m really hopeful that this project will raise awareness among people, and also that [it will fill] an empty part of the puzzle of the sanctions — which is only a word but it involves people’s actual lives,” Sohrabi says. “I wanted to fill that empty place in the puzzle of the sanctions, because that was a very, very empty part, because no one knows what happens in the daily life of people who have to go to drugstores, have to go to the hospitals.”

Western-made medicines and medical supplies are reportedly increasingly difficult to find as a result of international sanctions over Iran’s refusal to halt its uranium-enrichment program, a process that can be directed toward the creation of nuclear weapons.

In October, UN Secretary-General Ban Ki-moon said ordinary Iranians are feeling the effects of the sanctions, including rising inflation and unemployment, as well as a shortage of life-saving medicines.

“Tejaratnews,” an Iranian trade publication, published a list in October of 50 imported drugs it says have become rare as a result of financial sanctions.

Patients with chronic illnesses such as diabetes and cancer have also reportedly been stockpiling medicine, worsening the shortage of locally produced drugs, as well as those that are imported.

Sohrabi grew up in Tehran and has been living in Chicago for the last five months, working toward earning a master’s degree in fine arts.

Her friends in Iran collected many of the stories for her at pharmacies and hospitals. She also posted a video on her blog asking for Iranians to share their struggles.

Sohrabi acknowledged that it had not been possible to verify the accuracy of the tales but said that “the stories speak for themselves.” One reads:

“I am Manouchehr Esmaili. I was a 15-year-old from the southern city of Dezful in Iran. I was suffering from hemophilia. Due to U.S.-led sanctions against Iran, my family failed to find the vital medicine which was desperately needed for my disease. Last month, in November 2012, I was taken to a hospital. A week later, I died.”

Esmaili’s death was reported widely after it was announced by the director of Iran’s hemophilia society. RFE/RL, however, was not able to independently verify the director’s claims.

Sohrabi said other stories she found particularly striking included those of a mother who couldn’t get lactose-free milk powder for her lactose-intolerant baby, a father and daughter who couldn’t find the medication for a serious gastrointestinal illness, and a disabled photographer who sold his camera in an attempt to pay for a new prosthesis.

Sohrabi hopes to eventually fill 26,000 pill capsules with the stories, a number chosen to match the estimated 26,000 Iranians with blood disorders.