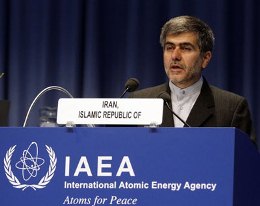 Iran defiant on enrichment ahead of possible nuclear talks

Iran will not stop higher-grade enrichment of uranium in response to external demands, Tehran’s top nuclear official was quoted as saying on Tuesday, signaling a tough bargaining stance ahead of planned new talks with world powers. Western powers want Iran to halt enrichment of uranium to a fissile concentration of 20 percent as it represents a significant step closer to the level that would be required to make nuclear bombs. Iran says it needs uranium refined to 20 percent to run its medical research reactor in Tehran.

Iran has reopened its consulate in the Afghan city of Herat, a week after it was reported closed following anti-Iranian protests outside the compound, the Iranian Foreign Ministry spokesman said. The demonstrators were protesting against the alleged killing of Afghan migrants by Iranian police, an assertion Tehran has denied. Iran’s state news agency IRNA reported on December 11 that Iran had shut the consulate.

A coal mine collapsed in central Iran on Tuesday, leaving four miners dead and another four missing, Iranian media reported, quoting officials. The probable cause was an “explosion of accumulated dangerous gas” in the mine near the city of Tabas, its governor Ahmad Talebian Moqadam told Fars news agency.

Israel sees new US poise, including military, to curb Iran

U.S.-led efforts to curb Iran’s nuclear programme have resumed since President Barack Obama’s re-election and include preparation for possible military action, a senior Israeli official said on Tuesday. The remarks by Vice Prime Minister Moshe Yaalon suggested cautious optimism at prospects for an international resolution to the decade-old standoff with Tehran, though Israel says it remains ready to attack its arch-foe alone as a last resort.

Iran’s president says Western sanctions could cause a short delay in Tehran’s nuclear program but will not slow it down substantially. State TV quoted Mahmoud Ahmadinejad on Tuesday as claiming that the “West is not happy with Iran’s progress” in various technological fields, including uranium enrichment, which is a possible pathway to nuclear arms.

Iranian Defense Minister Brigadier General Ahmad Vahidi says the country is planning the design and mass production of a wide range of Unmanned Aerial Vehicles (UAVs). “We will use every opportunity to design all kinds of drones,” the Iranian defense minister said on Tuesday.