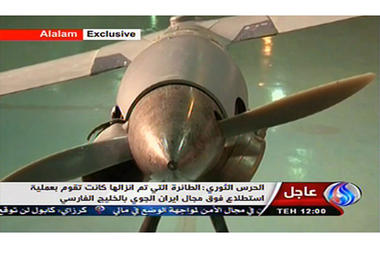 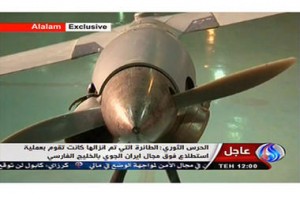 Iran says it got 2 more US drones in past missions

The naval chief of Iran’s Revolutionary Guard claims Iranian forces had captured at least two other U.S. drones before unveiling a purportedly downed ScanEagle craft earlier this month. Monday’s report by the official IRNA news agency does not say when the two other drones were allegedly taken.

Iran plans to hold military drills in the Strait of Hormuz, a vital oil and gas shipping route, by next March, Iranian media quoted a commander from the Islamic Revolutionary Guards Corps (IRGC) as saying on Monday. IRGC Navy Commander Rear Admiral Ali Fadavi told reporters on Monday that the drill would be held by the end of the current Iranian year, which ends on March 20, but gave no details on timing or what the exercise would involve.

Iran’s foreign minister said on Monday a way must be found to end the protracted deadlock between Iran and six world powers over Tehran’s nuclear program. “The two sides have reached a conclusion that they must exit the current stalemate,” Ali Akbar Salehi was quoted as saying by the Iranian Students’ News Agency.

Iran’s Majlis Speaker Ali Larijani says certain world powers seek to sabotage Tehran’s talks with the P5+1 group, comprising the permanent members of the UN Security Council plus Germany. “Regarding Iran’s nuclear energy program, certain world powers are preventing our country’s talks with the P5+1 from yielding results by creating problems and throwing spanners in the works,” Larijani said in a meeting with Vice-Chairman of the National Committee of the Chinese People’s Political Consultative Conference (CPPCC) Bai Lichen in Tehran on Sunday.

Iran is backing presidential elections in Syria as part of a six-point plan outlined Sunday to halt the 21-month civil war in Tehran’s main Middle East ally. The plan, described by state media and Iranian news agencies, also calls for efforts to halt the flow of weapons into Syria and to hold talks that include the government of Syrian president Bashar Assad.

The UN atomic agency, after a year of false starts, finally expects to sign a long-elusive deal with Iran on January 16, but that will be the easy part, experts say. Implementing the accord will be a lengthy and fragile process that will only partially resolve a decade-long standoff over Iran’s nuclear programme and help to silence Israeli “drums of war”.