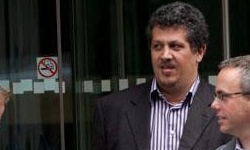 Mehdi Hashemi, the son of Iran‘s former president, Akbar Hashemi-Rafsanjani, has been released from Evin prison in Tehran after the completion of investigation against him. He  was freed on bail, Fars reported.

Mehdi Hashemi, who is accused of fomenting unrest in the post-election crisis of 2009, was arrested in September when he returned to Iran after a three-year absence. He has denied all charges against himself and, after two months in prison, as the judiciary claims to be completing its investigation of his charges, he has told his father that the authorities have no evidence against him.