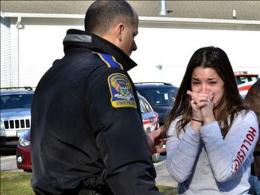 Twenty-eight people, including the gunman, died in Friday’s shooting spree in the town of Newtown, Connecticut, including 20 children and six adults killed at the school and one adult killed at a nearby site, police said.

The spokesman observed that “the children and young adolescents falling victim to armed clashes in Gaza or in the U.S., in Afghanistan or Pakistan, in Iraq or Syria, are not different from each other from the humanitarian point of view, so everyone should make efforts to restore peace, security and tranquility to the whole world,” IRNA said.

Israeli Prime Minister Benjamin Netanyahu, in a letter to U.S. President Barack Obama, condemned the “savage massacre of innocent children and adults at the Sandy Hook Elementary School in Connecticut.”

“We in Israel have experienced such cruel acts of slaughter and we know the shock and horror they bring,” Netanyahu wrote.

“In the aftermath of this senseless tragedy, he asks God our Father to console all those who mourn and to sustain the entire community with the spiritual strength which triumphs over violence by the power of forgiveness, hope and reconciling love,” Bertone said.

“Once again we’re completely aghast over an act that we can’t comprehend,” German Chancellor Angela Merkel said. “An incredible suffering has been brought to so many families so close to Christmas.

“The thoughts over the schoolchildren and teachers killed weigh heavily on our hearts,” Merkel added.

Leaders from France, Britain and elsewhere sent their condolences on Friday.

Germany, France, Britain and other European countries have suffered similar mass shootings – one man killed 77 people in Norway last year. But commentators in Europe were quick to point to Americans’ much higher levels of personal gun ownership as a factor in the frequency of U.S. shootings.