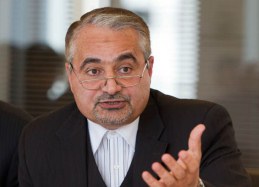 VOA: In your writings you have mentioned that nuclear arms are forbidden according to Islamic laws and even according to Ayatollah Khamenei’s own words. Does a nuclear fatwa exist on paper? And what guarantees are there that the Supreme Leader will not issue another fatwa reversing his previously stated positions if he feels the county is threatened?

Mousavian: First of all, what is a fatwa? Fatwa means a point of view of a religious scholar, a grand Ayatollah. This is a fatwa. Whether this is written, or orally, or even the office of a grand Ayatollah can inform the point of view or fatwa of a religious leader or grand ayatollah. But on this nuclear fatwa. First of all in an NPT conference, peaceful nuclear technology for everyone, nuclear bomb for no one in Tehran, I think it was in 2010, 2011.

The conference inauguration was through the official statement of the Supreme Leader first. Second, some months ago the heads of about 120 countries, about 40,50 countries they participated in non-aligned movement conference in Tehran at the level of the heads of countries and the rest at the level of foreign ministers. The leader personally in front of the 2/3 of international community personally, officially stated his fatwa. And third, the Iranian nation has registered the leader’s fatwa officially at the UN. This is the first time ever in the history of the UN a religious fatwa has been registered. Therefore I really disagree with those who question the credibility of  the fatwa. And this fatwa is not something new. But you should have in mind, during the war, the invasion of Iraq, the time Saddam Hussein used chemical weapons 100,000 Iranians were either killed or injured.

Iranian military officials asked Imam Khomeini to reciprocate with chemical weapons. He did not give permission to reciprocate. I believe when a country during war, exactly at the time when the enemy has used weapons of mass destruction, tens of thousands of civilians have been killed and a religious leader put a ban for its military to reciprocate this is the most credible evidence about the authenticity and legitimacy of such a fatwa.