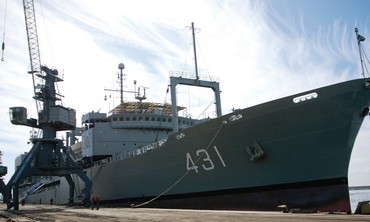 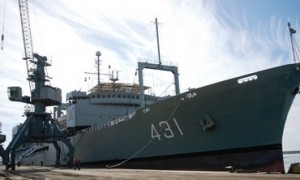 Sudanese opposition groups accused Khartoum this week of reaching a secret agreement with Tehran to establish an Iranian military base on the Red Sea.

Anti-government newspaper Hurriyat Sudan cited an unnamed opposition source on Monday as saying that the Sudanese government had struck a deal with Iran for building a base on the Sudanese coast.

Meanwhile, Sudanese rebel group The Justice and Equality Movement (JEM) said on Sunday that Sudan’s President Omar Bashir has reached a “very advanced” arrangement with Iran’s Revolutionary Guard Corps (IRGC) to establish a naval base either in Port Sudan or elsewhere on the Red Sea, according to the Sudanese anti-government news outlet Al Rakoba.

Mahjoub Hussein, a spokesman for the Justice and Equality Movement, said that the visit of the Iranian warships, the second in recent months, was not intended as a message to Israel but rather to test regional opinion regarding the establishment of an Iranian military base.

According to reports in the Sudanese press, Sudan’s army spokesperson Colonel Al- Sawarmi Khalid Sa’ad said on Friday that the visit by the Iranian military vessels is part of a “military exchange” with Iran. The ships are scheduled to stay for three days, during which they will be open for view by the public.

Iran has continued to push an aggressive naval strategy, which includes expanding its weapons systems and warships – including the Jamaran, a domestically-produced Mowj-class guided missile frigate first launched at Bandar Abbas in 2010. The ship combines anti-submarine assets, including a close-in anti-submarine torpedo system as well as surface-to-surface and surface- to-air assets.

The Iranian Navy has also extended its reach throughout the Strait of Hormuz, the Bab el-Mandeb strait in the Red Sea, the Suez Canal and the Strait of Malacca.

By extending its naval presence as far as Sudan and the Red Sea, Iran would gain several advantages, including in regards to combating Somali pirates in the Gulf of Aden but also in gaining control over the Red Sea shipping route, part of the channel through which Iran ships arms to the Hamas-controlled Gaza Strip. An Iranian naval presence in Port Sudan would also upset Iran’s Sunni rival Saudi Arabia, located just across the Red Sea.

For its part, Sudan has long courted deeper ties with Iran, with whom it signed a military cooperation agreement in March 2008.

Bashir has made several visits to Iran, the last in August when Tehran hosted the summit of the Non-Aligned Movement (NAM). Bashir has held onto power for 23 years following a bloodless coup in 1999, but is increasingly under threat, as Sudan struggles to overcome a $38 billion debt, particularly after the secession of oil-rich South Sudan last year and the renewal of US economic sanctions last month.

Last month, Khartoum said it foiled a coup against Bashir masterminded by the former head of intelligence, Salah Gosh.

Meanwhile, Sudan’s army, overstretched as it fights insurgents in its South Kordofan and Blue Nile border regions, has been accused of looking to Iran for military assistance.

In March, anti-government rebels accused Iran of sending members of its IRGC to boost government forces. Tehran denied the claims.

While Bashir is keen to show the world his country is moving closer to Tehran, there are rifts within Sudan’s ruling National Congress Party about the risks posed by the country’s bilateral ties with the Islamic Republic.

In November, Sudan’s Foreign Minister Ali Karti criticized the government for allowing Iranian warships to dock in Port Sudan, saying that he had not been consulted over the matter.

Iran previously dispatched warships to Port Sudan at the end of October, days after Khartoum accused Israel of carrying out an air strike against a munitions factory in the Sudanese capital. Jerusalem has neither confirmed nor denied striking the Yarmouk complex but officials have repeated accusations that Sudan and Iran are coordinating to smuggle arms to the Gaza Strip via Egypt.

In response to the air strike, Bashir threatened to work toward acquiring “advanced weaponry” to counter “repeated Israeli attacks.”

Echoing Tehran’s terminology and rhetoric, the Sudanese leader said that Israel was “the Zionist enemy and Israel will remain the enemy,” Sudanese news sources reported.

On Monday, opposition sources in Sudan again accused Khartoum of turning Sudan into an arena for Israel’s conflict with Iran.

Sudanese opposition group JEM also noted that the Iranian military vessels’ visit to Port Sudan risked upsetting the country’s delicate relationship with Gulf states, on whom it relies for aid. Karti has also said that Arab Gulf states are not happy about Khartoum’s ties with Tehran, and could deny aid.

According to a September report by the International Monetary Fund (IMF), Saudi Arabia pledged $240 million to Khartoum in the form of infrastructure loans over the last 18 months. However, so far only $80 million have been disbursed.