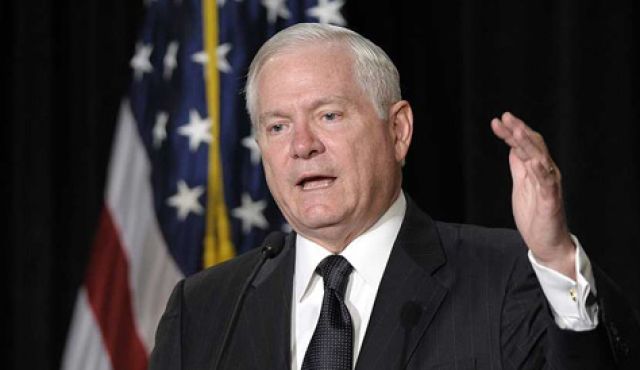 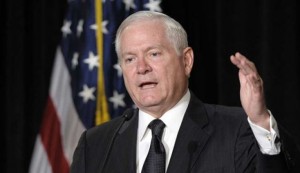 Former US Secretary of Defense Robert Gates raised his concerns about Iran’s nuclear ambitions and warned against an Iranian threat in the region on Thursday in İstanbul.

Speaking at the first Caspian Forum organized by the Caspian Strategy Institute, Gates said his view is that “the real purpose of the Iranian nuclear program is to have nuclear weapons capability,” adding that “we have to do everything possible to stop them from having nuclear power.”

In a warning about Iran’s nuclear program, Gates argued, “If the Iranian government won’t change its policies, it will lead to a nuclear arms race in the region.” Referring to the impact of the sanctions on Iran, Gates praised the joint efforts of the international community. “The European allies, Russia and China stepped up to put further sanctions on Iran, which made it more difficult to trade with Iran,” said Gates.

Referring to Syria as a “major security challenge,” Gates favored an external, though limited, intervention. “Outside powers should have limited intervention,” said Gates after underlining the importance of the post-intervention period. “We have been hearing calls for military intervention with little discussion of what comes next,” said the former US secretary of defense, who emphasized that the views he was expressing were his and not those of the US government.

Gates urged the Western world to “learn to deal with the Middle East in a new way” as he emphasized the importance not only of elections but of “building democratic institutions” in a world where “old authoritarian habits often die hard.”

Talking about the re-emergence of a 21st-century silk road, Gates said, “The US is encouraging the resolution of frozen conflicts.” However, in a critical remark, Gates mentioned the failure of Caspian countries to agree on maritime borders as well as Azerbaijan and Armenia blaming each other in their bilateral dispute. Azerbaijan’s Deputy Foreign Minister Khalef Khalefov, however, said, “If we want security and stability in Eurasia, the [Armenian] occupation [of Nagorno-Karabakh] should end,” as he criticized the double-standards of the Western world.

On the issue of regional conflicts in the area, Turkish Deputy Foreign Minister Naci Koru said that they keep the region “far from reaching its full potential,” adding, “We need to move beyond the status quo.” Koru also underlined Turkey’s increasing energy demand, which is expected to reach 50 billion cubic meters in a few years from the current 44 billion cubic meters. He reiterated Turkey’s “commitment to peace, dialogue and cooperation in the Caspian region” and advocacy for Caspian natural gas projects such as the Trans-Anatolian Gas Pipeline (TANAP).