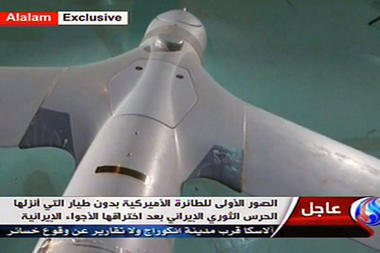 Iran lawmaker affirms Tehran has US drone – from the CIA, perhaps? 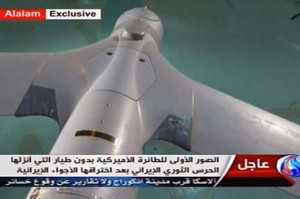 The US Navy has denied it’s missing any ScanEagle drones. But Iran claims to have evidence of the drone. An Iranian lawmaker suggests that maybe the CIA, instead of the Pentagon, is missing a spy drone.

Iran has material evidence to prove that it has captured an American unmanned aircraft, a prominent lawmaker in Tehran said Wednesday, rejecting U.S. Navy statements that none of its drones in the region was missing.

Tehran on Tuesday claimed to have captured a Boeing-designed ScanEagle drone after it entered Iranian airspace over the Persian Gulf, and even showed an image of the purportedly downed aircraft on state TV. The Islamic Republic trumpeted its possession of an allegedly intact U.S. drone as another prize in its growing showdown with Washington over surveillance of Iran’s disputed nuclear program.

“We have material evidence to prove that the drone we captured belongs to the U.S.,” Ismael Kowsari, the head of the Iranian parliament’s defense committee, told The Associated Press. “The unmanned aircraft took off from a warship. The Americans will have no choice but to confirm that one of their drones is missing.”

Kowsari did not say what proof the Islamic Republic has to back up his claims, but said Tehran will release more information on the aircraft soon.

The U.S. has White House press secretary Jay Carneysaid on Tuesday that “we have no evidence that the Iranian claims are true.” Cmdr. Jason Salata, a spokesman for the U.S. Navy’s Bahrain-based 5th Fleet, also said all U.S. drones in the region are “fully accounted for.”

The conflicting accounts could put pressure on both sides for more details on U.S. reconnaissance and Iranian counter-measures in the countries’ growing showdown over surveillance.

There is even the possibility the drone is authentic but was plucked from the sea after a past crash and unveiled for maximum effect amid escalating tensions over U.S. reconnaissance missions — including a Predator drone coming under fire from Iranian warplanes last month.

Kowsari dismissed suggestions that the drone could have belonged to other nations in the Gulf, including the United Arab Emirates, that have ScanEagle drones in service.

“The UAE doesn’t dare to engage in such activities against us. We have sufficient evidence to prove it is American. The U.S. commanders may need to recount their drones,” he said. “The capture of the drone demonstrates Iran’s capability of bringing down such aircraft intact.”

e accused the U.S. of stepping up its espionage activities in recent months against Iran as part of intensified Western efforts to force Tehran to abandon its uranium enrichment program, a key aspect of its disputed nuclear program. The U.S. its allies accuse Iran of trying to develop atomic weapons, a charge Tehran denies.

Iran believes the U.S. and its allies are seeking data about the flow of goods into Iran and the status of its oil exports after the 27-nation European Union imposed a total oil embargo against Iran July 1.

If true, the seizure of the ScanEagle drone would be the third reported incident involving Iran and U.S. drones in the past two years.

Last month, Iran claimed that a U.S. drone had violated its airspace. The Pentagon said the unmanned Predator aircraft came under fire — at least twice but was not hit — and that the drone was over international waters.

In late 2011, Iran claimed it brought down a CIA spy drone after it entered Iranian airspace from its eastern borders with Afghanistan and Pakistan. The RQ-170 Sentinel drone, which is equipped with stealth technology, was captured almost intact. Tehran later said it recovered data from the drone.

In the case of the Sentinel, after initially saying only that a drone had been lost near the Afghan-Iran border, American officials eventually confirmed it had been monitoring Iran’s military and nuclear facilities. Washington asked for it back but Iran refused, and instead released photos of Iranian officials studying the aircraft.

Salata, spokesman for the U.S. Navy’s 5th Fleet, noted Tuesday that some ScanEagles operated by the U.S. Navy “have been lost into the water” over the years, but there is no “record of that occurring most recently.”

Kowsari suggested that the drone may have belonged to the CIA if not the Pentagon but refused to go into details.

He said the Americans will eventually confirm the Iranian claims.

“When we captured RQ-170 Sentinel drone, the Americans initially refuted Iran’s version,” he said. “But later they had no choice but to admit it. The same will happen in the case of ScanEagle. It’s not something they can refute.”