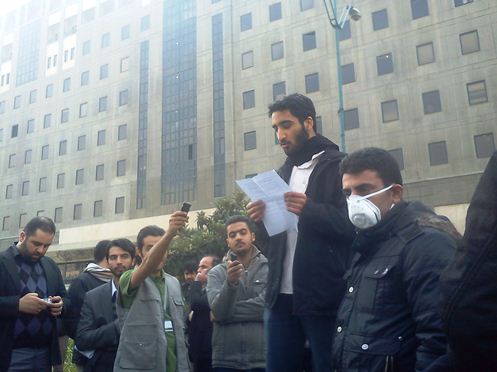 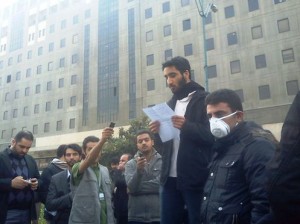 A group of Iranian university students gathered on Tuesday in front of Iran’s Majlis (parliament) to protest the amendment to the country’s presidential election law, particularly changes related to article 35 of the current regulations.

The amendment, the general outline of which was approved by the Iranian lawmakers on Monday, introduces many changes to the election law. According to the bill, presidential candidates should be 45-75 years of age and are required to have a master’s degree.

Moreover, the bill specifies that the presidential candidates must be approved by at least 25 members of the Experts Assembly, 100 members of Iran’s Majlis and 200 individuals who have served in the Majlis, been a cabinet minister, vice-president, deputy minister, ambassador and governor, secretary general of a political party and legal organizations.

Protesters carried banners that read, “Indebted president is not independent” or “How much costs a signature,” “We do not want a president indebted to power and money,” “Amendment to article 35 means banning independent candidates.”

The student said that by imposing such qualifications on presidential candidates, the government would fall in the hands of specific groups which is against Iran’s religious democracy.

The protesters are reportedly mainly from the same group that attacked Britain’s embassy last year and are supporters of Iran’s President Mahmoud Ahmadinejad.

Addressing the protesters, Iranian lawmaker Kazem Jalili said the article 35 of the amendment is against the Constitution and therefore would probably be omitted.

Meanwhile, Iran’s President Mahmoud Ahmadinjead has called on Majlis not to amend the national elections law as it is against the Constitution.