Iranian capital, Tehran shut down due to air pollution 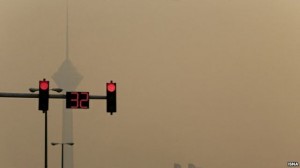 Morteza Tamaddon, governor of Tehran said that Tehran will be closed on Tuesday and Wednesday because of air pollution. “All government offices, schools and universities will be closed closed tomorrow and the day after tomorrow,we demand people to cut down on unnecessary city travel,” he added.

Air pollution has reached a critical level in the past few days due to trapped smog in the Iranian capital, as well as several other major cities, including Isfahan and Arak.

During recent years, the conflict between Iran’s current president (former Tehran mayor) and then Tehran mayor, Mohammad Bagher Ghalibaf as Ahmadinejad political rival led to the budget of public transportation development plan and fighting against air pollution plan not being paid

Moreover, President Mahmoud Ahmadinejad tried g to push a city wide migration away from Tehran into a more hospitable geographic area, though residents were not fond of his idea. He has moved some government agencies to other cities in an effort to jump start an exodus. But his plan did not work.

Each year around this time, the pollution forces the closure of schools and government institutes for several days.

Tehran has a similar geographical position to Los Angeles and Mexico City – two other cities that experience heavy air pollution.