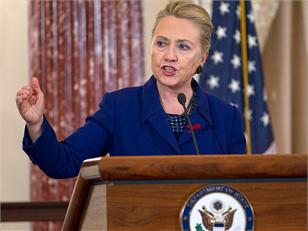 Clinton says U.S. open to bilateral talks if Iran is “ever ready” 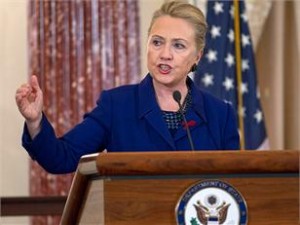 (Reuters) – The United States is open to bilateral talks about Iran’s nuclear program if Tehran is “ever ready,” U.S. Secretary of State Hillary Clinton said on Friday.

Responding to a question, Clinton called Iran the hardest issue she has dealt with as secretary of state “because of the dangers that its behavior already poses and the geometrically greater danger that a nuclear-armed Iran would pose.”

The United States and its allies suspect Iran of seeking to develop nuclear arms under cover of its civilian atomic program. Iran denies this, saying its program is for peaceful purposes such as power

Under a “two track” policy, the United States and other major powers have sought to negotiate a diplomatic solution while gradually increasing economic sanctions against Iran to try to force it to come to terms.

Speaking to a group of officials, experts and diplomats from the United States and the Middle East, Clinton stressed that the Obama administration is prepared for bilateral talks with Iran.

For now, Clinton said Washington is working with members of the so-called P5+1 group of major powers – Britain, China, France, Germany, Russiaand the United States – to resume talks with Iran about its nuclear program.

“We are working on the P5+1 and making our willingness known that we are ready to have a bilateral discussion if they are every ready to engage,” said Clinton, who has said she plans to step down as secretary of state next year.

While giving no details, Clinton said the P5+1 was trying to craft a proposal to Iran “that does make it clear we are running out of time. We have got to get serious; here are issues we are willing to discuss with you but we expect reciprocity.”

In October, diplomats had said they were considering asking Iran for stricter limits on its nuclear program in exchange for an easing of sanctions in a long-shot approach aimed at yielding a solution that has eluded them for a decade.

One option could be for each side to put more on the table – both in terms of demands and possible rewards – than in previous meetings in a bid to break the stalemate despite deep skepticism about the chances of a breakthrough any time soon.