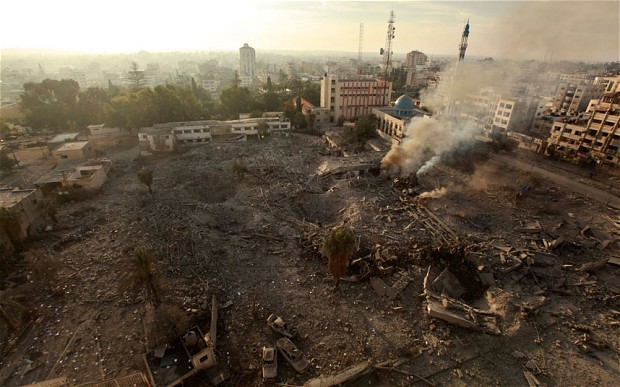 Is Hamas Really a ‘Surrogate’ of Iran? 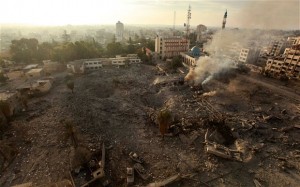 Is Hamas a puppet of the Iranian regime? An affirmative answer to this question is, from the point of view of Bibi Netanyahu, a dual-use rhetorical technology: (1) It helps justify the recent bombardment of Gaza (since one goal of the operation was to deplete an Iranian-supplied missile stock that Iran could in theory activate against Israel in the event of war). (2) It helps justify Netanyahu’s uncompromising stance toward Iran (since, the more pervasively threatening Iran seems to Israelis, the easier it is to convince them that the Iranian regime is beyond the reach of negotiation).

The Hamas-as-Iranian-puppet narrative gets help from American media. Consider, for example, this week’s New York Times piece by David Sanger and Thom Shanker asking what the recent Israel-Gaza conflict tells us about how a possible war with Iran might play out. Referring to Netanyahu and President Obama, Sanger and Shanker write:

And one key to their war-gaming has been cutting off Iran’s ability to slip next-generation missiles into the Gaza Strip or Lebanon, where they could be launched by Iran’s surrogates, Hamas, Hezbollah, and Islamic Jihad, during any crisis over sanctions or an Israeli strike on Iran’s nuclear facilities.

The confident assertion that Hamas is an Iranian “surrogate”–a claim Sanger and Shanker never get around to substantiating–is oddly out of touch with recent developments in the region.

It’s certainly true that Hamas had, and still has, lots of Iranian-supplied missiles, the product of a close relationship that goes back years. But this past year has seen developments that changed the relationship.

First, Hamas ended its relationship with the Syrian regime and moved its leadership out of Syria–a move that not only strained relations with Syrian ally Iran but may have deeply altered them. In March, a Hamas official said Hamas would not serve as Iran’s retaliatory surrogate in the event of an Israeli attack on Iran and would not get involved in an Israel-Iran war.

Second, the sudden slack in Hamas’s relationship with Iran seems to have been taken up by Qatar, which is now bankrolling Hamas, and, in a different way, by Egypt, which is closer to Hamas under President Morsi than it was under Hosni Mubarek. This shift in Hamas’s source of support–from Iran and Syria toward Qatar and Egypt–could prove constructive in the long run, since both Qatar and Egypt are members of the global establishment and seem to want to stay that way.

None of this means Hamas’s relationship with Iran is over. Indeed, with Hamas now basking in the glow of what it’s calling a victory over Israel, gratitude for the missiles Iran sent to Gaza is onconspicuous display. Still, Hamas’s behavior during the conflict with Israel may say more about its relationship with Iran than any niceties emanating from Gaza afterwards. On this point it’s worth reading Meir Javedanfar, an Israeli academic of Iranian descent who teaches a course on Iranian politics. His take:

Apart from supplying weapons, Iran did not have any other influence. If it did, and Hamas was acting as its proxy, the latter would not have agreed to a cease-fire and instead done everything to force Israel to launch a land invasion in Gaza. Such an outcome would have many benefits for Iran and, in fact, this is what Iran’s military and political leaders wanted. They wanted to see Israel stuck in a quagmire in Gaza, with its economy and diplomatic standing suffering heavily while its relations with Egypt reached breaking point. Unfortunately for the Iranian regime, it did not get its wish precisely because Hamas is not its proxy, nor does it have any political influence over Hamas. Otherwise, the story would have been different.

The Hamas-as-Iran’s-surrogate motif has dramatic appeal, and journalists, like the rest of us, like drama. But dramatization often means simplification. And when the prospect of war is real–as it was with Iraq in 2002, as it is with Iran now–journalists have a particular responsibility to resist incendiary oversimplification.