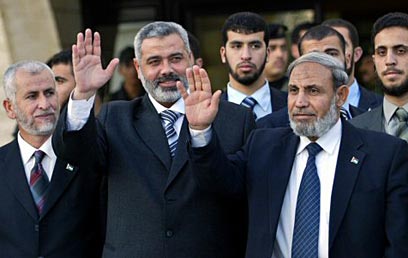 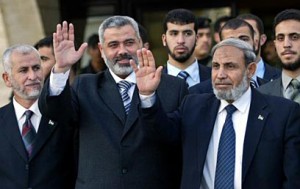 Hamas official Mahmoud al-Zahar said Saturday that after Hamas’ rain of rocket fire that reached as far as Tel Aviv and paralyzed swathes of southern Israel, “the Jews will think twice before” attacking Iran.

“We have no choice but to continue to bring in weapons by all possible means,” he said, adding that he expected Tehran would “increase its military and financial support to Hamas.”

“We have a right to take money and weapons from Iran. They (Iran) give to us for the sake of God, no conditions attached, and I am a witness to that,” Zahar told reporters.

“If they don’t like it, let them compete with Iran in giving us weapons and money,” he said in an apparent jab at the Gulf states.

Ahmadinejad said Iran stands with the Palestinian people and asked Haniyeh to send his condolences to the families of those killed during the IDF’s Operation Pillar of Defense in Gaza. Haniyeh thanked the Iranian president and told him that the “victory” belongs to Muslims worldwide.

On Saturday, Hamas’ Mousa Abu Marzook said that Hamas will not stop arming itself because only a strong arsenal, not negotiations, can extract concessions from Israel.

“There is no way to relinquish weapons,” Abu Marzook said in his office on the outskirts of Cairo. “These weapons protected us and there is no way to stop obtaining and manufacturing them.”

He said the group would not stand in the way of a bid by its main political rival, internationally backed Palestinian President Mahmoud Abbas, to seek UN recognition for a state of Palestine next week.

But he did suggest that Abbas is wasting his time at the UN. “Hamas believes the General Assembly is not the one to create states,” he said. “Occupation needs resistance, not negotiations.”

In Gaza, residents said Saturday that Israel has already eased some restrictions.

Fishermen were able to sail six nautical miles out to sea, or double the previous limit, said Mahfouz Kabariti, head of the local fishermen’s association. “This is an opportunity and a chance for a better catch, though it is still a limited area,” said Kabariti, who represents some 3,500 fishermen.