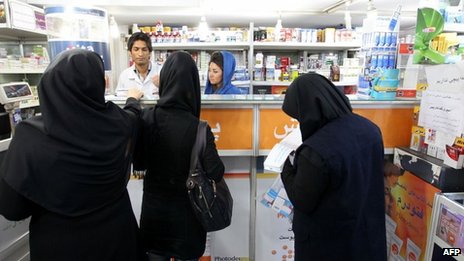 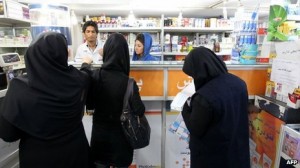 Hospitals, clinics and pharmacies in Iran are running out of medicine as the government cuts health funding because of international sanctions, putting the lives of thousands of people at risk, reports the BBC’s Mohsen Asgari.

At the well-known 13 Aban Pharmacy in central Tehran, Atefeh Allahyari is queuing.

Ms Allahyari left her house at 04:30 to make sure she would be first to get Paclitaxel, a chemotherapy drug used to treat cancer, for her younger brother. However, she does not hold out much hope.

“I have come here for the last four days, but the pharmacists say nothing has arrived yet,” she says.

Khosrow, one of the pharmacists, says there is nothing they can do.

“We cannot import medicine,” he explains. “My uncle has been in this job for many years but he cannot import anything because no banks accept Iran’s money for fear of facing punishment by the West.”

“They are not legally bound to refuse services to Iranians; but they err on the safe side for fear of getting into trouble.”

Although trade in medicine is exempt from international sanctions imposed by the UN Security Council and the unilateral sanctions announced by the US and EU, Iranian importers say Western banks have been declining to handle it.

The US and EU have placed restrictions on dealings with Iran’s Central Bank – the only official channel for Iranians to transfer money abroad – and Swift, the body that handles global banking transactions, has cut Iran’s banks out of its system.

The move has isolated Iran financially by making it almost impossible for money to flow in and out of the country. Foreign currency which Iran used to receive for its oil and gas exports has also dried up in the wake of an EU-wide embargo.

The government said in July that it had $150bn in foreign currency reserves to help cushion the blow of the sanctions. By October, the central bank’s reserves were reported to have fallen to $110bn. Iran’s currency, the rial, is also believed to have lost 80% of its value against the dollar since the start of the year.

A subsidised exchange rate was set up by the government to protect vital imports, but some reports say it has been open to abuse. The health ministry has also allegedly been denied access to cheap dollars to purchase medicine and equipment.

Officials have also sought to step up domestic production of medicine. However it has been limited by subsidy reforms which have increased the cost of fuel and electricity, as well as by shortages of increasingly-expensive raw materials.

On Wednesday, Britain’s Times newspaper reported that Iran had stockpiles of medicine to last only another 100 days.

Iranians suffering from diseases such as the blood disorders thalassemia and haemophilia, and various types of cancer, so far have been hardest hit.

For months they have had to worry about whether they could afford the spiralling cost of vital drugs, but now they are struggling to get hold of them.

Manouchehr Esmaili-Liousi, a 15-year-old boy suffering from haemophilia, died in July because his family did not have access to medicine.

He was from a nomadic tribe based in the mountains near the city of Dezful, in Iran’s south-western province of Khuzestan.

“He lived far away from the city and because the family had not the medicine on the spot they had to take him to hospital. But it was too late,” Ahmad Ghavidel, the director of the Iranian Haemophilia Society, told local media.

Mr Ghavidel blamed Manouchehr’s death on the US and EU sanctions.

“This is against human rights. Even in wars, women and children and patients are protected by international treaties,” he added. “But sanctions hitting medicine in Iran are causing a silent death and are a ploy to hurt the health of Iranian people.”

Milad Rostami, a seven-year-old haemophilia sufferer from Kuhdasht, a town in Lorestan province, desperately need injections of a US-made medicine, but it is no longer available locally in sufficient quantities. Supplies have run out even in Tehran.

Milad has been receiving treatment at the Iran Haemophilia Centre.

“We came to Tehran by bus to find medicine for our son. He had to take medicine two to three times a day. But now he receives injections every three or four days and his bleeding is increasing,” says Afsaneh Souri, his mother. “They say the medicine is scarce.”

Fatemeh Hashemi Rafsanjani, the head of Iran’s Charity Foundation for Special Diseases, has expressed serious concern about the fates of the six million patients, especially those suffering from haemophilia, multiple sclerosis and cancer.

In a letter to the UN secretary general, she wrote that restrictions on bank transfers had severely affected the import of medicines.

“I hereby implore you to exert all your endeavours to champion human rights in lifting the sanctions as they are political in nature and prove to the inexcusable detriment of the patients in Iran,” she said.

In a statement, the US treasury said: “It has been the longstanding policy of the United States not to target Iranian imports of humanitarian items, such as food, medicine and medical devices.

“If there is in fact a shortage of some medicines in Iran, it is due to choices made by the Iranian government, not the US government.”

Critics of the government believe its mismanagement of the national finances, as well as the inefficacy of local bureaucracies and corruption, have exacerbated the problems.

Many importers say they have struggled to get access from state institutions to the dollars and euros they need to purchase medicines, most of which are made in the West.

Iranian Health Minister Marziyeh Vahid Dastjerdi recently complained her department’s inability to get access to foreign currency she had been promised.

“Some $2.5bn has been allocated for [the import of] medicine,” she said. “However, Iran’s Central Bank has given only $600m to the ministry since the beginning of the Iranian year [in March 2012].”

Importers have also complained that customs duties on medicine have risen significantly, while some have been accused of withholding stocks to increase prices.

The Times reported that drugs for a course of chemotherapy which would cost $2,000 at the state-subsidised rate, now cost $6,000.

There are also reports of a black market in medicine developing, as well as claims that hospitals are turning to drugs which have been struck off by the health authorities but remain available and affordable.

Sanctions or mismanagement? For patients and their families it does not matter which one is to blame for the crisis which is slowly threatening a nation’s health.