Iran, Azerbaijan to discuss use of River Araz water to fill Lake Urmia 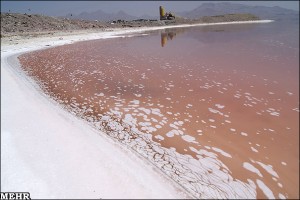 The issue of using water from the River Araz to fill drought stricken Lake Urmia will be discussed with Azerbaijan. Afterwards, a project will be implemented within the agreements, general director of the Trans boundary Rivers and Shared Water Resources Bureau under the Iranian Ministry of Energy Jabbar Vatanfada told İRNA today.

“We hope that Azerbaijan will agree to the use of waters from the River Araz to fill Lake Urmia in the interests of the environment and good neighbourly relations,” he added.

According to the official statistics, some 70 per cent of Lake Urmia is shallow. Currently, a litre of lake water contains up to 400 games of salt. Previously, the amount of salt in a litre of water was 160-170 grams.

The area of Lake Urmia is about 6000 square kilometres. The lake drying up has an impact on the flora and fauna of the region.

The United Nations Development Programme (UNDP) has allocated $135 million to Iran to resolve its environmental problems with shoaling at Lake Urmia.

The Iranian government allocated $900 million for this purpose in September 2011.
A project of directing 600 million cubic meters of water from the River Araz into Lake Urmia was launched during a visit of Iranian President Mahmoud Ahmadinejad and members of the government to Tabriz in 2010. It was planned to allocate $1.2 billion to implement this project.

Protest actions were held in Tabriz and Urmia in connection with the shoaling of Lake Urmia in 2011. Dozens of Iranian Azerbaijanis were arrested.

He added that this will not be required for the hydroelectric power station. The existing watercourse will be enough.