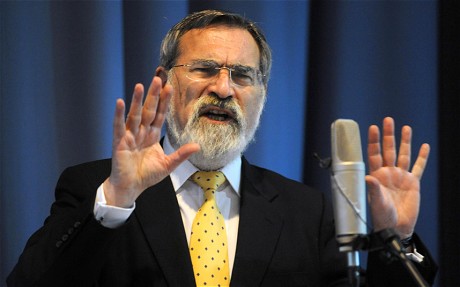 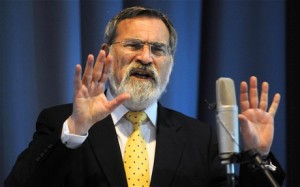 The BBC has apologised to Lord Sacks, the Chief Rabbi, after he suggested the conflict in Gaza was fuelled by tensions over Iran when caught off guard on live radio.

Lord Sacks had just completed one of his regular “Thought for the Day” broadcasts on BBC Radio 4 when he was asked by the Today programme presenter, Evan Davis, if he had “any thoughts” on the clashes in the Middle East.

The Orthodox Jewish leader paused and sighed audibly, before suggesting that Iran was the real issue behind the crisis.

He frequently makes unscripted interjections – usually after another presenter has finished interviewing a guest – and asks the interviewee for a view on an unexpected subject, before moving to the next item.

However this approach appeared momentarily to confuse the Chief Rabbi today.

Mr Davis said: “Jonathan, before you go, you know, any thoughts on what’s going on over in Israel and Gaza at the moment?”

Lord Sacks sighed, before replying: “I think it has got to do with Iran, actually.”

Mr Davis’s co-presenter, Sarah Montague, was clearly concerned that Lord Sacks did not seem to know his remarks were still being broadcast and could be heard to whisper: “We, we’re live.”

Lord Sacks then swiftly adopted a more formal broadcasting manner and suggested the crisis demanded “a continued prayer for peace, not only in Gaza but for the whole region”.

“No-one gains from violence. Not the Palestinians, not the Israelis. This is an issue here where we must all pray for peace and work for it,” he said.

Mr Davis thanked his guest and announced that the programme would “move on” to the next item.

n a statement the BBC apologised for catching the Chief Rabbi off-guard.

A spokesman said: “The Chief Rabbi hadn’t realised he was still on-air and as soon as this became apparent, we interjected. Evan likes to be spontaneous with guests but he accepts that in this case it was inappropriate and he has apologised to Lord Sacks. The BBC would reiterate that apology.”

As the most prominent Orthodox Jew in Britain, Lord Sacks’s remarks on tensions in the Middle East are always closely scrutinised.

In an official statement on the escalating crisis between Gaza and Israel yesterday, he offered support for the Israelis’ right to defend themselves.

“In the past week alone over 275 rockets have been fired into southern Israel from Gaza,” he said. “No nation on earth can be expected to live under this constant threat to innocent life.

“The people of Israel are entitled, as is any other nation, to live in peace and safety. We mourn with all the bereaved families, and pray for an end to the hostilities from which both sides suffer.”

The Israeli army, the IDF, has pointed to Iranian involvement in the conflict. It yesterday claimed Hamas had turned the Gaza Strip into a “front line base for Iran, carrying out terror attacks and firing rockets at Israeli citizens.”

Last night, David Cameron spoke by telephone to the Israeli Prime Minister, Benjamin Netanyahu, to discuss the situation following Israel’s assassination of Ahmed Jabari, the Hamas military chief, in a drone strike on his car on Wednesday.

In a statement after the talks, Downing Street said the government believed Hamas bears “principal responsibility” for the escalating crisis.

A spokesman added: “The Prime Minister said that the priority must be to de-escalate the crisis.

“He called on Mr Netanyahu to do all he could to avoid civilian casualties and emphasised that both sides needed to avoid a spiral of violence that would be in no-one’s interest, particularly at a time of instability in the region.”

Iran has condemned Israel’s attacks on Gaza as “terrorism”.