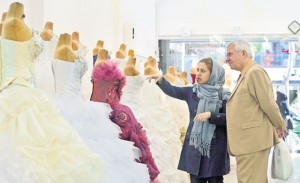 Iran weddings are common in the lead up to the start of Muharram, a month of mourning particularly for Shiite muslims, which make up the majority of the Islamic Republic.

Brides heading to the salon and picked up by their grooms after beauty treatments are a usual sight for Tehran residents. But it has recently decreased due to the dwindling currency and consequential economic deterioration, the Financial Times reported online on Saturday.

One female hairdresser said that while people in her profession had appointment laden schedules, the case was otherwise this year. “We’re sometimes sitting doing nothing for hours,” she said.

The number of marriages in Iran was 7.5 percent lower during late March to late May, to the same period last year.

Majid, a 27-year old Iranian photographer, said his family advised him to put his wedding on hold. He said his mother told him they could not afford a wedding and they could not meet his fiancee and her family.

The average groom with university education earns 10 million rials, amounted to $1000 last year. It has now dropped to $330. He would be expected to spend anywhere between $10-15,000 on wedding costs covering his bride’s dress and gifts, and catering to guests. The bride is expected to reciprocate such spending.

A drop in purchasing power is one threat to marriage, as prices in gold and home appliances, a staple for newly-wed life in Iran, increase.

Shopkeepers at Tehran’s grand bazaar, a traditional shopping hub, said they noticed shoppers would check out prices of certain goods and but leave with small purchases.

An example provided by the Financial Times is the Bosch vaccum cleaner.

Wedding-related expenditure isn’t limited to the average consumer, but also wealthier families who would spend an estimated $100,000 on the
wedding ceremony alone have grown careful.

A high-end wedding planner said that she has received few orders this month, pointing out that residents in general are hesitant about spending money in the current unstable economic climate.

Aside the decline of marriage rate, recent demographic trends also showed a rise in divorce, and many newly-wed couples opting out of having children, with the economic crisis being one of the determining factors.

The value of the national currency, rial, took a plunge by more than 50 percent this year, following U.S. and EU banking and oil sanctions. This has led to a spike in consumer prices.

Economists and residents have argued Iran’s central bank inflation estimate of 25 percent, saying it plays down the true rate.