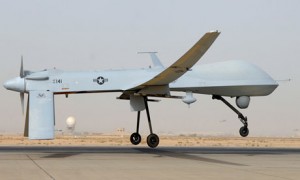 Iran says the Predator drone was over Iranian territorial waters; the Pentagon says the spy plane was in international airspace. It was not damaged.

WASHINGTON — Iran’s government confirmed Friday that two of its warplanes fired at a U.S. surveillance drone flying over the Persian Gulf, but contradicted Pentagon claims that the unarmed aircraft, which was not damaged, was in international airspace when attacked.

Iran’s defense minister, Ahmad Vahidi, said an unidentified aircraft was detected Nov. 1 over Iranian territorial waters, and it was forced to flee “due to the timely, quick and decisive action of the Iranian armed forces,” according to the official Press TV news agency.

The attack, the first known episode in which Iranian jets shot at a remotely piloted U.S. spy plane, increased tension in the volatile region. Washington and Tehran broke off diplomatic relations in 1979, so the Obama administration has lodged a formal protest via the Swiss Embassy in Tehran.

Pentagon officials did not initially disclose the attack because, they said, it involved a classified mission. They answered reporters’ questions about it Thursday after news organizations reported it.

George Little, the Pentagon spokesman, said two Russian-built Su-25 jets, known as Frogfoots, fired “multiple rounds” at a Predator drone on a surveillance flight 14 miles off Iran’s coast. It’s unclear whether they tried to shoot it down and missed or were firing warning shots.

Little said the jets were under control of the Revolutionary Guard Corps, which is more powerful and aggressive than the country’s regular air force. He said the Predator was “never in Iranian airspace.”

In December, an RQ-170 surveillance drone operated by the CIA was downed deep inside Iran. Iran claimed it had hacked the drone’s guidance system and forced it to land, but U.S. officials said it had suffered a technical problem and crashed.

The latest incident underscores the risk of a military confrontation in the standoff over Iran’s disputed nuclear program. It also poses a new peril to diplomatic talks over the nuclear program, which are expected to resume now that the American election has taken place.

Diplomats speculated that Iran may have fired at the drone to show its unhappiness with U.S. surveillance but was not trying to destroy the slow-moving craft, which would have risked U.S. retaliation.

Pentagon officials refused to discuss whether destruction of the Predator would have been viewed as an act of war.

“The congested traffic in the gulf and the various surveillance mechanisms could provoke a conflict that neither side really wants,” said Ray Takeyh, a former Obama administration advisor on Iran. “This is the danger of unmitigated antagonism between the U.S. and Iran.”

President Obama vowed repeatedly during the presidential campaign to order a military attack on Iran if necessary to stop it from obtaining a nuclear weapon. Iran denies it is seeking to build an atomic bomb. It accuses Washington of trying to oust Iran’s rulers and kill its nuclear scientists.