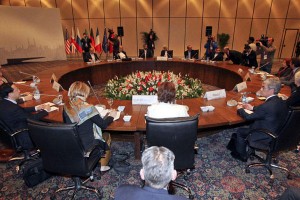 VIENNA, Nov 9 (Reuters) – The U.N. nuclear agency said it would hold a new round of talks with Iran on its atomic programme next month, in the latest push to resolve a dispute that has raised fears of war in the Middle East.

Friday’s announcement was made days after the re-election of U.S. President Barack Obama, a development analysts say may create a fresh opportunity to press ahead with efforts to find a peaceful end to the decade-old crisis with Iran.

But time may not be on the side of diplomacy: Israel, assumed to be the volatile region’s only nuclear-armed power, has often threatened military action if Tehran does not halt its nuclear activities. Iran has repeatedly ruled out doing that.

The United Nations’ International Atomic Energy Agency (IAEA) said it hoped the talks in Tehran would produce an agreement that would allow it to resume a stalled investigation into possible military aspects of Iran’s nuclear programme.

Iran denies Western allegations that it is trying to develop the capability to make nuclear weapons.

“The IAEA and Iran have agreed to hold further talks on 13 December in Tehran,” agency spokeswoman Gill Tudor said.

“The aim is to conclude the structured approach to resolving outstanding issues related to Iran’s nuclear programme,” she said in response to a question.

The last meeting between Iran and the IAEA, the Vienna-based organisation tasked with preventing the spread of nuclear arms in the world, took place in August but failed to make progress.

Iran’s ambassador to the IAEA, Ali Asghar Soltanieh, was not immediately available for comment.

Now assured of a second term, Obama, who has so far resisted calls in the United States and Israel for an attack on Iran, appears free to pursue a diplomatic settlement while threatening yet heavier sanctions if Tehran does not bend.

The United States and its allies want Iran to curb its uranium enrichment programme. Iran, one of the world’s largest oil producers, say the West must first lift increasingly harsh sanctions imposed on the Islamic Republic.