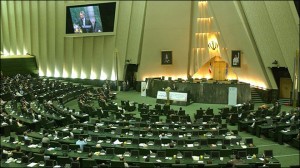 According to the directives of the bill, Iran’s crude exports will be reduced to almost 77 percent in the current Iranian calendar year ending on March 20, 2013.

“The government is required to reduce oil exports up to one- third compared with last year’s in line with the Islamic republic’ s overall goal of preserving national independence and as a requirement of the present time,” the bill was quoted as saying.

The bill is waiting for the final approval of the entire parliament, said the report.

On Monday, Iranian Oil Minister Rostam Qasemi said the Islamic republic would react to the possible tougher sanctions from the West on the country’s oil industry.

Qasemi said Iran would reconsider its oil exports, implying that the country might stop or reduce its crude exports to the international market.

“The lack of Iran’s oil in international markets will lead to an increase in its global price,” Qasemi said, adding that in that case people in consuming countries will suffer.

He further pointed out that despite the tough sanctions by the West, Iran’s oil industry has “successfully” overcome problems and made remarkable progress, according to IRNA, Iran’s official news agency.

Qasemi said last month that Iran had embarked on an endeavor to develop green energy in order to reduce its domestic fossil fuel consumption.

Iran has plans to increase the production of alternative energy like solar energy, wind energy and bio-fuels in order to reduce the usage of its own oil and gas reserves for internal purposes, he said.

The European Union (EU) made a decision last month to enforce fresh sanctions against Iran, including a ban on the import of natural gas from Iran to the EU. It also agreed to broaden the existing export ban on key equipment and entities for Iranian oil, gas and petrochemical industries.

The EU imposed an embargo on Iran’s oil export on July 1.