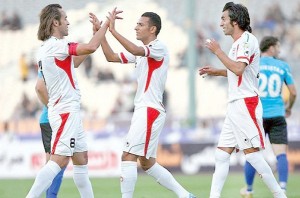 Iran is preparing for the Uzbekistan match in the 2014 World Cup qualifier which will be held on November 14.

In October, Iran beat South Korea 1-0 in the qualifying tournament.

After four rounds of the games, South Korea remains atop Group A with seven points on goal difference, followed by Iran in second place.

The Uzbeks are third with five points, one point ahead of Qatar and Lebanon.