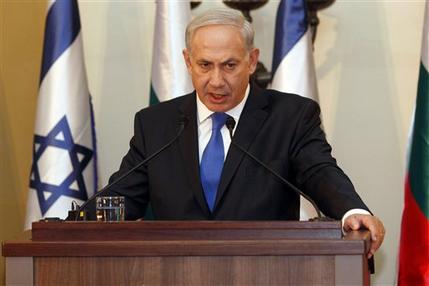 FILE – In this Sept. 11, 2012, photo, Israeli Prime Minister Benjamin Netanyahu speaks during a joint press conference with his Bulgarian counterpart Boyko Borissov, not seen, in Jerusalem. Netanyahu is making a direct appeal to U.S. voters to elect a president willing to draw a “red line” with Iran. Netanyahu on Sunday, Sept. 16, 2012, used this week’s focus on unrest across the Muslim world to warn Americans watching two Sunday talk shows that time is running out to confront Tehran on its nuclear program. It was an impassioned election-season plea for a world leader who insists he doesn’t want to insert himself into U.S. politics. (AP Photo/Gali Tibbon, Pool)

Israeli PM makes direct appeal to US voters: Elect the president willing to draw a ‘red line’ with Iran