U.S. President Obama speaks about immigration from Rose Garden of the White House in Washington 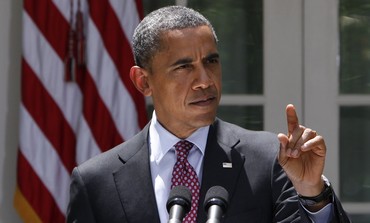 U.S. President Barack Obama speaks about immigration from the Rose Garden of the White House in Washington June 15, 2012. President Obama said on Friday his administration’s decision to stop deporting some illegal immigrants who came to the United States as children was a “just” move that was not a permanent fix to the country’s immigration problem. REUTERS/Yuri Gripas (UNITED STATES – Tags: POLITICS)

Obama to rabbis: No ‘set of conditions’ on Iran