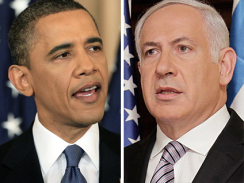 President Barack Obama and Israeli Prime Minister Benjamin Netanyahu discussed Iran’s suspected atomic weapons program amid a rift between the two nations over how to confront the Iranian security threat.

The two leaders spoke by phone last night for an hour, the White House said. While providing no further details, the White House said in a statement Obama and Netanyahu “reaffirmed that they are united in their determination to prevent Iran from obtaining a nuclear weapon.”

Netanyahu declared earlier yesterday that the Obama administration has no “moral right” to keep Israel from attacking Iran as long as the U.S. doesn’t set “red lines” for Iran. His remarks reflect differences within his government about an Israeli attack on Iran and a bid to pressure Obama less than two months before the U.S. election. The call came after Israeli media reports, denied by the White House, that Netanyahu’s request to meet Obama later this month was snubbed.

“Strategically it’s not in either of their interests to show the world they are not on the same page,” said Aaron David Miller, a former State Department official who served under Democratic and Republican presidents.

In addition to strategic concerns, there are political implications for both leaders. The dispute hurts Netanyahu’s efforts to convince divided Israelis of the merits of a strike, Miller said in an interview. For Obama, locked in a tight race with Republican challenger Mitt Romney who has been questioning Obama’s commitment to Israel, the differences may affect his appeal with voters in battleground states.

“In a close election you don’t want to alienate anyone,” said Miller, who’s now at the Woodrow Wilson International Center for Scholars, a Washington policy group.

Obama’s objective between now and the election is to avoid an Israeli attack, Miller said, “because war introduces uncertainties” that may include a doubling or tripling of oil prices, turmoil in European and American markets and public division over a discretionary war.

Miller said his experience suggests last night’s call was a “let’s put things back in the box” discussion and not a breakthrough session.

“If these reports are true, the White House’s decision sends a troubling signal to our ally Israel about America’s commitment at this dangerous and challenging time, especially as Iran continues to work actively toward developing a nuclear weapons capability,” they said in a statement.

White House National Security Council spokesman Tommy Vietor said yesterday that Obama and Netanyahu wouldn’t be in New York at the same time, and that “contrary to previous press reports, there was never any request for a meeting” between Netanyahu and Obama.

The newspaper Haaretz was among media outlets in Israel that reported earlier that the White House rejected a request by Netanyahu for a meeting.

Romney and his campaign refrained from any immediate reaction because Netanyahu’s comments coincided with the anniversary of the Sept. 11, 2001, terror attacks on New York and Washington, and the candidates had pledged to set aside partisanship for a day.

The Republican nominee made no mention of the U.S.-Israeli dispute in a speech to National Guard members in Reno, Nevada. That may change as soon as today.

During a July trip to Israel, Romney said it is “right” for the U.S. to stand with Israel and use “any and all measures” to stop Iran from developing atomic capabilities. Throughout the campaign, Romney has portrayed Obama as insufficiently supportive of Israel.

Opinion polls show the majority of Americans favor a cautious approach to Iran.

A survey by the Chicago Council on Global Affairs found 70 percent of Americans oppose a unilateral strike against Iran while 59 percent don’t want the U.S. involved in a potential war between Israel and Iran. The survey of 1,877 adults, conducted May 25-June 8, has a margin of error of plus or minus 2.8 percentage points.

While Iran is “an issue of concern” for voters, “I don’t think this is the focal point for most people,” said Dennis Ross, a former senior Middle East adviser to Obama and other U.S. presidents of both political parties.

“The people who don’t support the president will be quick to grab onto something like this,” Ross said. “Those who do will think his overall approach to this is still a sound one.”