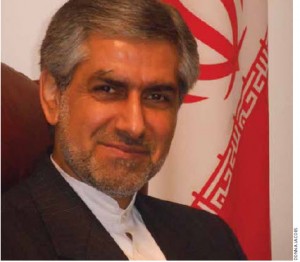 The ousted chargé d’affaires for Iran’s shuttered embassy in Ottawa told CBC’s Peter Mansbridge his staff “have done nothing wrong,” laughing off suggestions that diplomats with the Islamic republic were ordered to leave Canada because of alleged sleeper agents and claims of harassment against Iranian-Canadians.

In an exclusive interview, Kambiz Sheikh-Hassani blamed “outside governments and entities” for influencing a recent and sudden decision by Ottawa to force the closure of the embassy and send the Iranians back home.

All of Canada’s diplomats were also instructed to leave Iran, and embassy operations in Tehran were shut down.

Sheikh-Hassani said he was given no prior warning of the directive and said he hasn’t been provided with any evidence to justify what he called an “unwise, uncivlilized, hostile” action.

“[Canadian officials] have nothing substantial against this embassy. We have done everything within the framework of international law and respecting the Canadian law,” he said in his office, days after receiving written notice informing him the diplomats would be given until Wednesday to leave.

“We have done nothing wrong, and I can rest assure you that … whatever allegations they have made against us have nothing to do with the activities of this embassy; it is international concerns.”

Asked to specify which countries or international entities he was referring to — and whether that included Israel and the U.S. — Sheikh-Hassani would not elaborate.

Israel has long been an arch-enemy of Iran’s, and the Jewish state has previously hinted at launching a pre-emptive military strike targeting Iran’s nuclear facilities. The U.S., meanwhile, has levelled a series of economic sanctions on Iran over its nuclear program.

Iran has insisted the nuclear project is peaceful, but refuses to fully open it to UN nuclear inspectors.

On Monday, Immigration Minister Jason Kenney told CBC’s Evan Solomon on Power & Politics that a culture of harassment and intimidation by Iranian diplomats in Canada was another reason for cutting ties.

But Sheikh-Hassani, who has been in Canada for 21 months, insisted embassy workers were committed to serving the country’s large Iranian population.

“This is totally baseless. This office has been a place that many, many Iranians happily received quality consular services,” he said.

When pressed about suggestions by some foreign affairs analysts that Canada’s decision might have been provoked by concerns that Iran was installing sleeper cells in the West, Sheikh-Hassani scoffed.

“I am laughing because it is a laughable matter,” he said. “There is nothing whatsoever to substantiate such allegations. If they had any such evidence, they would have used it against us as the reason to close this embassy.”

Sheikh-Hassani said he was confident that the Canadian government knows “Canada’s safety and security is not in danger by Iran,” but nevertheless severed diplomatic ties needlessly.

In Iran, the reaction to Canada’s condemnation of the Iranian regime was met with harsh words for Prime Minister Stephen Harper.

“The current government of Canada under the leadership of Mr. Stephen Harper is known for extreme policies in the domain of foreign policy,” Iranian Foreign Ministry spokesman Ramin Mehmanparast said in a statement, quoted by the state-run Mehr news agency.

“The hostile behaviour of the current racist government in Canada in reality follows the policies dictated by the Zionists [Israel] and the British.”

Last November, Iranian students stormed the British Embassy in Tehran and ransacked its offices. Britain’s Foreign Office summoned an Iranian diplomat in London amid complaints that Iran failed to provide proper security to the embassy and didn’t do enough in response to the attack.

Sheikh-Hassani said he was only informed that he and his staff would have to pack up and leave last Friday, when he was hand-delivered a letter at the embassy door.

“I think our major guilt here was to provide a quality service to the Iranian community, making their relationship with the country excellent,” he said.

“I am very proud that I served my country to the best of my ability. I am going home with my head held high,” he added.