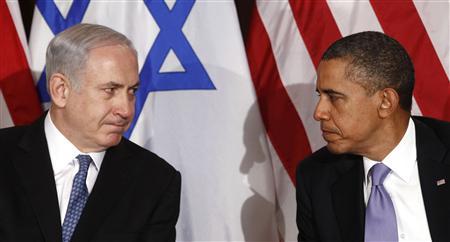 (Reuters) – In a highly unusual rebuff to a close ally as tensions escalated over how to deal with Iran’s nuclear program, the White House said on Tuesday President Barack Obama would not meet Benjamin Netanyahu during the Israeli prime minister’s U.S. visit later this month.

The apparent snub, coupled with Netanyahu’s sharpened demands for a tougher U.S. line against Iran, threatened to plunge U.S.-Israeli relations into crisis and add pressure on Obama in the final stretch of a tight presidential election campaign.

An Israeli official, who declined to be identified, said the White House had refused Netanyahu’s request to meet Obama when the Israeli leader visits the United States to attend the U.N. General Assembly, telling the Israelis, “The president’s schedule will not permit that.”

White House spokesman Tommy Vietor denied that Netanyahu had ever made such an overture – let alone that it had been spurned – insisting instead that the two leaders were attending the General Assembly on different days and would not be in New York at the same time.

Netanyahu has had a strained relationship with Obama, but they have met on all but one of his U.S. trips since 2009. The president was on a foreign visit when the prime minister came to the United States in November 2010.

By withholding a meeting, the Democratic president could alienate some Jewish and pro-Israel voters as he seeks a second term in the November 6 election. Romney has already accused Obama of being too tough on Israel and not hard enough on Iran.

Obama and Netanyahu, according to a White House summary of their call, reaffirmed a “united” determination to prevent Iran from acquiring a nuclear weapon and to continue close consultations. But they mentioned nothing about the “red lines” Netanyahu wants Obama to set for Tehran.

Obama’s avoidance of a face-to-face meeting could signal U.S. displeasure with Netanyahu’s intensifying push a specific ultimatum to Iran. Obama aides say privately they believe Netanyahu favors Romney, a fellow conservative, although the Israeli leader has been cautious to avoid being seen interfering in the election campaign.

Word that the two men would not meet came on the same day that Netanyahu said the United States had forfeited its moral right to stop Israel from taking action against Iran’s nuclear program because it had refused to be firm with Tehran itself.

Netanyahu has argued that setting a clear boundary for Iran’s uranium enrichment activities and imposing stronger economic sanctions could deter Tehran from developing nuclear weapons and mitigate the need for military action.

In comments that appeared to bring the possibility of an Israeli attack on Iran closer, Netanyahu took Washington to task for rebuffing his call to set a clear “red line” for Iran’s nuclear program, which has already prompted four rounds of U.N. sanctions.

“The world tells Israel, ‘Wait, there’s still time.’ And I say, ‘Wait for what? Wait until when?'” Netanyahu said.

“Those in the international community who refuse to put red lines before Iran don’t have a moral right to place a red light before Israel,” he added, addressing a news conference with Bulgaria’s prime minister.

John McCain and Lindsey Graham, Republican senators and critics of Obama’s foreign policy, said in a joint statement: “It is puzzling that the president can’t make time to see the head of state of one of America’s closest allies in the world.”

“If these reports are true, the White House’s decision sends a troubling signal to our ally Israel about America’s commitment at this dangerous and challenging time,” they said.

Iran makes no secret of its hostility to Israel, widely assumed to be the region’s only nuclear-armed power, but says its nuclear program is purely peaceful.

Netanyahu’s relations with Obama have been tense because of Iran and other issues, such as Jewish settlement building in the occupied West Bank.

But he has never framed his differences with Obama – who has pledged he will “always have Israel’s back” and has not ruled out military action against Iran if all else fails – in moral terms.

Obama has been seeking to shore up his advantage over Romney with Jewish voters – who could make a difference in election battleground states like Florida and Ohio – by stressing his support for Israel’s security. He received 78 percent of the Jewish vote in 2008, but a nationwide Gallup poll in June showed him down to 64 percent backing versus Romney’s 29 percent.

While seeking to put Netanyahu in his place might not go down well with pro-Israel voters, the White House may also be trying to avoid an embarrassing encounter. When the two men met in the Oval Office in May 2011, Netanyahu lectured Obama on Jewish history and criticized his approach to Israeli-Palestinian diplomacy.

Netanyahu’s office had offered a solution to the leaders’ scheduling problems by having him visit Washington before his U.N. speech on September 28, but the White House did not accept the idea, the Israeli official said.

Obama, who is keeping up a busy schedule of campaign rallies across the country, is expected to take a break to address the opening session at the United Nations on September 25.

There was no immediate comment from the Romney campaign, which had curtailed its public statements out of respect for the 11th anniversary of the September 11, 2001, attacks.

Netanyahu’s harsh comments on Tuesday followed U.S. Secretary of State Hillary Clinton’s remarks on Monday that the United States would not set a deadline in further talks with Iran, and that there was still time for sanctions and diplomacy to work. Clinton – instead of Obama – will meet Netanyahu at the United Nations later in September, the White House said.

U.S. Defense Secretary Leon Panetta said on Tuesday that Washington would have little more than a year to act to stop Iran if it decided to produce a nuclear weapon.

Iran has threatened to retaliate against Israel and U.S. interests in the Gulf if it is attacked, and any such conflict could throw Obama’s re-election bid off course.

Netanyahu did not mention Clinton by name, but pointedly parroted her use of the word “deadline,” saying: “If Iran knows that there is no ‘deadline’, what will it do? Exactly what it’s doing. It’s continuing, without any interference, towards obtaining a nuclear weapons capability and from there, nuclear bombs.”

“So far, we can say with certainty that diplomacy and sanctions haven’t worked. The sanctions have hurt the Iranian economy, but they haven’t stopped the Iranian nuclear program. That’s a fact. And the fact is that every day that passes, Iran gets closer and closer to nuclear bombs.”

Despite the recent tougher Israeli rhetoric, over the past week, Netanyahu, in calling for a “red line,” had appeared to be backing away from military action. Polls suggest a majority of Israelis do not want to strike Iran without U.S. support.

“Despite the differences and importance of maintaining Israel’s independence of action, we must remember the importance of partnership with the United States and try as much as possible not to hurt that,” a statement from his office said.