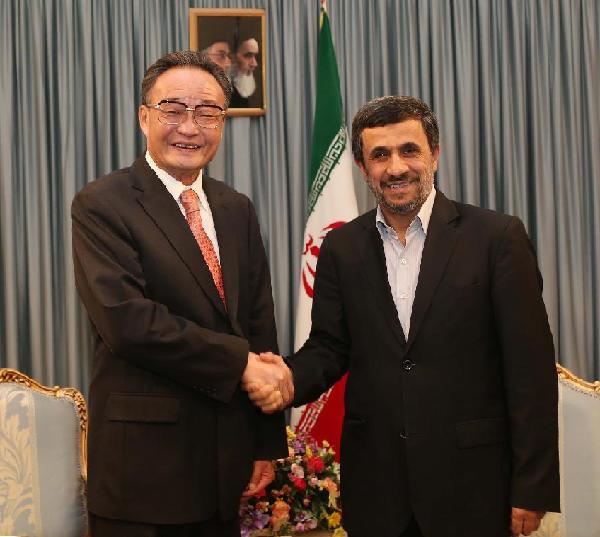 China’s top legislator, Wu Bangguo, has met with Iranian President Mahmoud Ahmadinejad in Tehran. The two sides discussed bilateral cooperation in a number of areas including trade and energy cooperation.

The nuclear issue was another key topic. Wu Bangguo reiterated that China stays fair and objective on Iran’s nuclear issue. Ahmadinejad expressed Iran’s hope that the issue will be settled through dialogue.

Top legislator Wu Bangguo pointed out that a friendly China-Iran relationship is to the benefit of the two nations and their peoples.

He appreciated Iran’s support for the one-China policy and praised Iran’s offer of support on issues of major significance for China.

As for economy and trade, Wu stressed that the two nations should solve problems and boost cooperation based on mutual respect and benefit.

Ahmadinejad said that Iran will continue to expand its practical cooperation with China in economy, trade, energy, agriculture and infrastructure.

The nuclear issue was another key topic during the meeting between the two sides.

Wu Bangguo said that China has always held a fair and objective stance on the Iranian nuclear issue. He said that China is opposed to the research, development and possession of nuclear weapon by any Middle East country, but China also believes that a country’s right to the peaceful use of nuclear energy should be guaranteed in line with relevant regulations.

China has always believed that dialogue and cooperation are the right way to properly settle the Iranian nuclear issue. Wu Bangguo called on Iran to stick to peaceful negotiations with the five permanent members of the UN Security Council plus Germany, and continue to be flexible and pragmatic, in order to achieve substantial progresses in negotiations.

For his part, Ahmadinejad briefed Wu Bangguo on Tehran’s stance regarding the nuclear issue.

He said that Iran hopes to settle the issue through dialogue and cooperation and will stay in touch with all the parties concerned.

Chinese top legislator Wu Bangguo, who is on a four-nation tour, arrived in Iran on Sunday for a four-day visit. He will also go to Myanmar, Sri Lanka and Fiji.