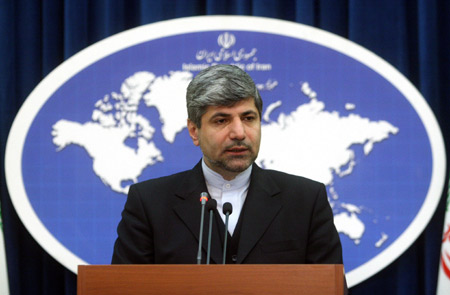 TEHRAN: Diplomats in Iran enjoy the “highest level” of security, the foreign ministry spokesman said on Tuesday in rejection of the main reason Canada gave for abruptly closing its Tehran embassy and evacuating staff.

“We have provided the best conditions for all the diplomats. Security in our country is at its highest level compared to the rest of the regional countries,” spokesman Ramin Mehmanparast told reporters in a weekly briefing.

He rejected Canada’s explanation that it had closed its Tehran embassy because “the Iranian regime has shown blatant disregard” for the safety of foreign diplomats on its soil.

Canadian Foreign Minister John Baird said in a statement on Friday: “Our diplomats serve Canada as civilians, and their safety is our number one priority.”

Canadian officials pointed to the storming and ransacking of Britain’s embassy in Tehran during a state-organised demonstration on November 29 last year. As a result of that violation, London closed the mission, evacuated its shaken diplomats and ordered Iran’s diplomats out of Britain.

Western countries are sensitive about the safety of their diplomats in Iran ever since the US embassy hostage crisis in Tehran in the wake of Iran’s 1979 Islamic revolution, in which 52 US diplomats were held for over a year.

Increased speculation of imminent Israeli air strikes on Iranian nuclear facilities have added to their concerns of retaliation against Western targets in Tehran.

Canadian officials said their decision on the embassy was not based on any foreknowledge of such an attack, but they have shied away from saying what specific threat prompted the move.

Other Western embassies in Tehran said they had no plans to follow Canada’s decision.

Mehmanparast said the high security Iran deployed around an August 30-31 summit of non-aligned states held in Tehran “shows that such issues that some countries and officials of Canada’s extremist government have announced are inappropriate and are derived from their anger” over the summit’s “success.”

He attributed any doubts about the protection of foreign diplomats in Iran to “the Western media’s propaganda.”