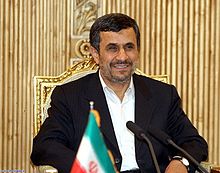 DUBAI, United Arab Emirates (AP) — As Iran’s president crafts his talking points for his annual trip to New York, one message is likely to remain near the top: Tehran has not closed the door on nuclear dialogue and is ready to resume negotiations with world powers.

The offer is not very different from those coming out of Washington and other capitals. The challenge is figuring out how to overcome the huge divides after three rounds of high-level meetings since April failed to make headway.

Questions over whether the diplomatic effort still has a pulse will closely follow Mahmoud Ahmadinejad during his time at the U.N. General Assembly later this month — his last as Iranian president before elections next June for his successor. His expected speeches and interviews will be scrutinized for any hint Iran is softening its positions on the nuclear talks as Western sanctions bite deeper and Israeli leaders contemplate military action dismiss diplomacy as a dead end.

For the moment, Iran appears to favor a strategy of pumping just enough life into the prospect of renewed dialogue.

Officials in Tehran have kept open channels with the U.N. nuclear agency and European Union envoys over possibilities to restart the talks with the five permanent Security Council members plus Germany.

“Iran will not distance itself from talks,” said Ismail Kowsari, a member of Iran’s influential parliamentary Committee on National Security and Foreign Policy.

And the nations involved in the talks all hope to avoid an Israeli strike on Iranian nuclear facilities — and the possibility of igniting a larger war.

“In that sense, cold gridlock is better than hot combat,” said Karim Sadjadpour, an Iranian affairs expert at the Carnegie Endowment for International Peace.

But it’s also clear that Iran has not publicly backed off its demands from the previous failed rounds. They include recognition of Iran’s right for uranium enrichment — at the center of the nuclear standoff — and calls for the U.S. and its European allies to ease the sanctions that have hit Iran’s critical oil exports and left it blackballed from key international banking networks. Last week, Iran received at least a symbolic boost when the 120-nation Nonaligned Movement, meeting in Tehran, backed Iran’s claims of seeking a peaceful nuclear program.

The U.S. and others worry Iran could use its enrichment labs to produce warhead-grade material. Iran insists it seeks only to make nuclear fuel for energy and medical reactors.

The West, meanwhile, has stuck with its blueprint of what’s been described as “stop, shut and ship.”

The mainstay is forcing Iran to halt enrichment uranium to 20 percent purity, which is much closer to weapons grade than the 3.5 percent needed for Iran’s lone electricity-producing reactor. Iran would also have to close its underground Fordo enrichment site south of Tehran — far smaller than Iran’s main enrichment facility but believed virtually impervious to air attack — and ship abroad its stockpile of 20 percent-enriched uranium.

During the last talks in June in Moscow, the West tried to sweeten the package by offering to waive sanctions on airplane parts and other goods. A former Iranian nuclear negotiator, Hossein Mousavian, described it as offering peanuts in return for diamonds.

“Tehran is not hopeful about the talks,” said Sergei Barseghian, a commentator at the independent Etemad newspaper in Tehran. “Sanctions and military threats have been increased since the last round of negotiations.”

Still, Ahmadinejad will arrive in the U.S. with all sides clinging to the diplomatic efforts — and with perhaps some extra breathing room against a possible Israeli military strike.

Israeli officials appear to have throttled back on their threats after facing an unusually sharp backlash from key ally Washington, including the U.S. military chief, Gen. Martin Dempsey, effectively ruling out American backing for an Israeli strike at this time. The Obama administration, instead, urges for time to let tightening sanctions choke off the Iranian economy.

Military analysts say air strikes would likely bring only setbacks, but no permanent blows, to Iran’s nuclear program. It also could send oil prices skyrocketing and put U.S. troops in the Gulf under threat — unsettling scenarios for the White House in an election year.

White House press secretary Jay Carney said earlier this week that “a diplomatic process” remains the best route to reach a “completely verifiable” agreement with Iran not to seek nuclear arms. “But that window will not remain open indefinitely,” he added.

Iran’s main allies on the Security Council also have intensified calls to keep the talks on track. Russia’s Deputy Foreign Minister Sergei Ryabkov said Friday that more meetings are expected to try to end the current impasse. “It’s very important not to lose the momentum,” he said.

In Beijing, Foreign Ministry spokesman Hong Lei this week urged Iran to reach accords with the U.N.’s International Atomic Energy Agency over inspections that could clear the way for more nuclear talks. A main obstacle is U.N. demands for greater access to the Parchin military complex near Tehran to probe suspicions that Iran carried out blast tests that could be intended for a nuclear trigger. Iran denies the claims but has yet to agree to open up the site for wider inspections.

“Nuclear talks are mostly likely going nowhere unless there is an agreement on the guidelines for inspections,” said Scott Lucas, an Iranian affairs expert at Britain’s Birmingham University. “You need a protocol for U.N. inspections of nuclear sites. Otherwise, it’s hard to see the negotiations resuming.”

It’s also unclear how much Ahmadinejad is empowered to discuss the stalled talks during his coming visit to the U.N.

Iran’s nuclear negotiations are overseen directly by Supreme Leader Ayatollah Ali Khamenei, who has largely pushed Ahmadinejad to the political margins after he tried to challenge the near-absolute power of the ruling theocracy. Ahmadinejad cannot independently set Iranian policies, but he remains the international face of Iran and his remarks at the U.N. and other forums are interpreted as messages from the ruling clerics.

Statements earlier this week suggest he may use the U.N. stage to press Iran’s demand that lifting sanctions must be part of the nuclear negotiations.

On a live TV talk show, Ahmadinejad acknowledged that the oil and banking sanctions have presented “barriers” to Iran’s economy. “It is an all-out, hidden, heavy war” to force concessions on Tehran’s nuclear program, he said.

Nicholas Burns, a former No. 3 official at the State Department, said failure to restart the negotiations between Iran and the five permanent Security Council members plus Germany should not be considered the last option for Washington. Burns, now a professor of diplomacy and international politics at Harvard’s Kennedy School of Government, said that could lead to “a final attempt” at direct talks with Tehran.

“It is in our interest to seek direct U.S.-Iran talks,” he said, “to determine whether or not there is a diplomatic solution short of war.”