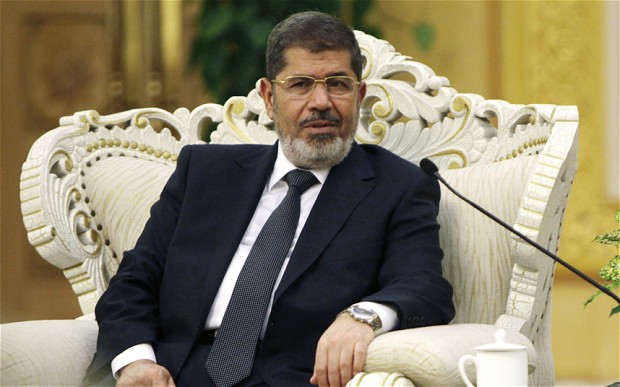 Three key American allies have invited Iran to help try to thrash out a solution to the Syrian crisis, threatening to sideline the West as the region is reshaped by the “Arab Spring”.

Egypt, Turkey and Saudi Arabia’s plans to join Iran in forming a new “quartet” to negotiate an end to the civil war were announced by Egypt’s new Muslim Brotherhood president, Mohammed Morsi, at a meeting of the Arab League in Cairo yesterday.

The decision to include Iran in the face of attempts by the West to exclude it from negotiations over Syria is a clear snub to their historic backers.

The United States at the same time chose to highlight Iran’s continued to support for the Assad regime in its fight against the Free Syrian Army.

One western diplomat reacted to the formation of the new quartet by repeating the West’s oft-expressed view that “Iran’s part would be anything but constructive”.

President Morsi, a former engineering professor from a provincial university once dismissed as too lightweight for the Egyptian leadership, has been on a diplomatic roll in the last week.

In a calculated display of the Brotherhood’s determination to distinguish the new Egypt from that of President Hosni Mubarak, who presented himself as Washington’s best friend in the region, he chose China as the venue for his first foreign visit. He then set himself further apart from the United States, even as he was negotiating a new USD1 billion loan from Washington, by agreeing to attend a meeting of the Non-Aligned Movement in Tehran.

But he also made clear he was not “going over to the other side”, as some American commentators feared, by telling his Iranian hosts to abandon their support for President Bashar al-Assad.

In his speech yesterday, Mr Morsi reiterated that Mr Assad had to stand down, hinting that otherwise he might meet the fate of other Arab leaders who tried to cling on to power in the face of protests, such as Mr Mubarak, now in jail for life, or Col Muammar Gaddafi of Libya, now dead.

“It’s too late to talk about reform,” he said. “This is the time for change. The Syrian regime must learn from recent history.”

However, the agreement by Saudi Arabia, Turkey and Egypt, all part of the Middle East’s dominant Sunni axis, to talk to their Shia rival Iran suggests that they fear the spillover of a sectarian war in Syria that would be beyond all their control.

The decision may also be an indication of a new determination to assert greater independence from the West – likely to be a popular stance with their own populations. The Muslim Brotherhood has historically been hostile to the US, while the leaders of Turkey and Saudi Arabia, although not wanting to break with the West, are both uncomfortable with recent American Middle East policy.

The western diplomat said it was important to see what concrete proposals Mr Morsi might now make, adding: “We can understand where Morsi is coming from. But we are not sure Iran’s involvement would be conducive to any positive outcome”.

According to the New York Times report, the Iranian supply flights to Syria stopped in March when the Iraqi government was asked by Washington to refuse overfly rights. They resumed after the Syrian regime lost four of its most senior figures in a bomb attack in Damascus, sending panic through both the regime and its backers in Iran.

Since then, the Iranian government has publicly admitted it is sending members of the Revolutionary Guard to fight alongside Syrian forces.

With Saudi Arabia, Qatar and Turkey all supporting the mainly Sunni rebels, the war is becoming widely seen in the region as a proxy battle for influence between Sunni states backed by the West and anti-American Shia rivals led by Iran.

The more the rebels seize the military initiative, the more danger there is of a wider Shia backlash, possibly involving Hizbollah, the Shia militia that has almost unchallenged power in Lebanon and is Israel’s sworn enemy.

The rebel offensive against the Syrian air force continued yesterday, with an attack, apparently successful, on another regime airbase in the east of the country, near the Iraq border.

Rebels also claimed to have shot down two more regime fighter jets. A video posted online appeared to show the tail-fin and other remnants of one jet brought down over Idlib province, with the body of its pilot nearby.

The Iran Project is not responsible for the cotent of quoted articles.