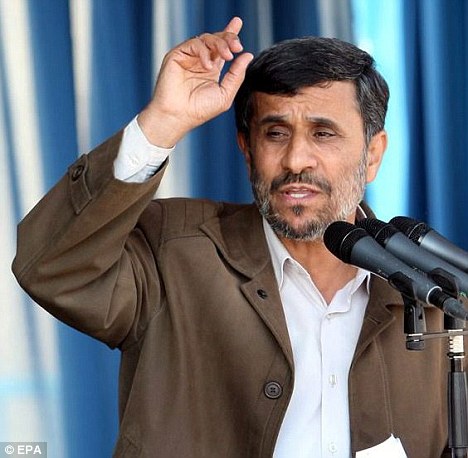 Iran has “problems” exporting its oil, President Mahmoud Ahmadinejad admitted on Tuesday, but he said his government was determined to overcome that and other challenges posed by Western economic sanctions.

“There are some problems in selling oil and we are trying to manage it,” he said in an interview broadcast live on state television.

Ahmadinejad accused “the enemy” of using “psychological warfare” against his country by imposing sanctions that have taken a toll on the economy.

His admission capped a recent change in tone from Iran’s top leaders, who for months had denied the sanctions were having an effect.

Some lower-ranking officials were maintaining the previous message, however.

OPEC, though, in its latest monthly report noted Iranian oil production has slumped to its lowest point in more than two decades, to 2.8 million barrels per day.

The International Energy Agency in its most recent report said Iran was exporting one million barrels per day, less than half the amount Tehran said it had been exporting at the beginning of the year.

The United States and the European Union this year dramatically ramped up sanctions they started imposing on Iran in 2010 over its disputed nuclear program.

The measures include an EU embargo on Iranian oil and US sanctions on financial transactions.

The sanctions are “blocking off conduits… like the conduits of selling oil, foreign exchange, our banks and the central bank,” the president said.

He said that “we are working to bypass them day and night,” for instance by telling “an oil ship which route it takes.”

But, he explained, “most of the time when an obstacle is created, it takes a long time to remove it.”

Ahmadinejad said he was confident Iran would weather the sanctions.

“We have oil and the world needs it,” he said, adding that his government was also running a “very rigid budget.”

Western nations, the United States at the fore, suspect Iran is developing a nuclear weapons breakout capability under cover of its civilian atomic energy program. Iran denies that.

“I insist that the Islamic Republic of Iran is never seeking nuclear weapons,” its supreme leader, Ayatollah Ali Khamenei, told a summit of non-aligned countries in Tehran last week.

He also insisted that Iran would not curb its pursuit of nuclear energy.

Khamenei has told the country to establish an “economy of resistance” to counter the sanctions, notably by boosting domestic production and self-reliance.

He and Ahmadinejad have urged Iran to wean itself off its reliance on crude oil exports, with Ayatollah Khamenei calling them a “trap” inherited from before the country’s 1979 Islamic revolution.

In an opinion piece published by Fars news agency on Tuesday, Tehran’s chief prosecutor Abbas Jafari Dolatabadi said Iran’s media should “refrain from painting a bleak picture and exaggerating the problems” in the country.

“Instead, (the media) should create an atmosphere of hope and joy to prove that they can become a major asset in defending the Islamic Revolution,” he wrote.