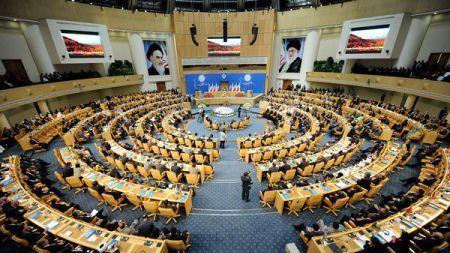 NAM summit wraps up in Tehran

The 16th summit of the Non-Aligned Movement (NAM) has wrapped up in Tehran by approving the draft resolution by the member states.

The 16th Summit of the Non-Aligned Movement (NAM) in Tehran

The closing ceremony of the NAM summit began on Friday in Iran’s capital, Tehran, with the presence of members’ heads of state.
Sudanese President Omer al-Bashir presided over the second day of the NAM summit.
Venezuela’s proposal to host the next NAM summit was also approved by the member states.
The NAM also voiced support for the rights of the Palestinian nation in the draft resolution.
More than 100 countries participated in the NAM summit which kicked off at the expert level in Tehran on Sunday.
The two-day foreign ministerial meeting wrapped up on Wednesday with member states finalizing a draft document after two days of deliberations.
The meeting of the NAM heads of state began on Thursday with a speech by Leader of the Islamic Revolution Ayatollah Seyyed Ali Khamenei.
NAM, an international organization with 120 member states that represents nearly two thirds of the United Nations., is considered as not formally aligned with or against any major power bloc.